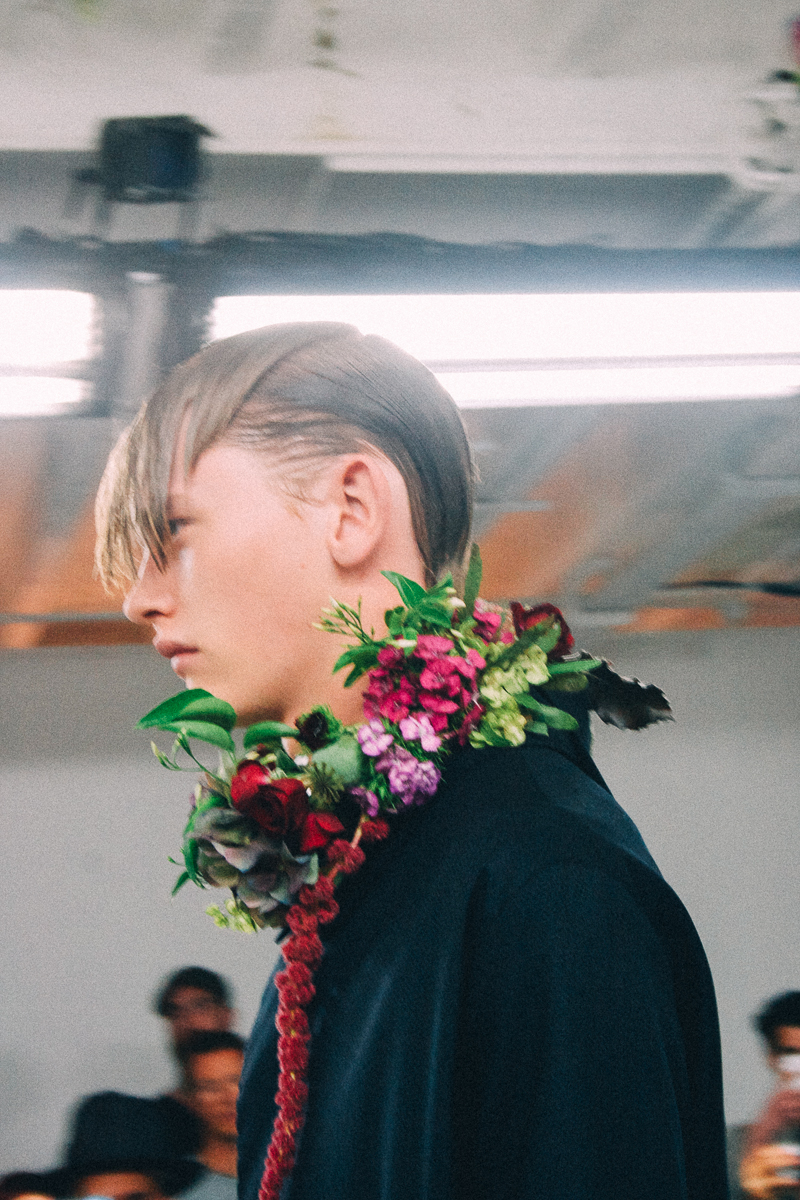 I’ve decided to split this seasons LC:M coverage into two distinct categories, supermodernity and retro-fetishism. You can pick up the fashion trends yourself from looking at the pictures but many of these trends haven’t changed in the last few seasons as men’s trends have greater longevity than women’s. Furthermore many of the new trends won’t translate to the street as the average man doesn’t really want to wear a skirt over a pair of trousers. So instead I’m going to approach the collections from more of a sociocultural angle.
This week we’re looking at supermodernity. A handful of designers presented collections which pushed their aesthetic forward, embracing contemporaneity when not futurism. Agi and Sam‘s SS15 collection was clean and sleek with an androgynous if not feminine edge. There was a clinical element to the designs, like futuristic hospital scrubs. Actually after ruminating on the collection I finally locked down what it was that the collection reminded me of. It was George Lucas’ art-house predecessor to Star Wars, THX-1138 (1971). I guess the inevitably nightmarish dystopian future that awaits us all will at least be a stylish one. Wide legs trousers are long overdue a comeback as fashion is after all cyclical and the skinny silhouette has been dominant for too long. Agi & Sam’s pleated versions are paired with sandals and socks, breaking one of those classic fashion “don’ts“. The shorter version of this trouser is wide enough to technically qualify as culottes; which adds to the androgyny. Some looks have a kind of ecclesiastical feel as if our future dystopia involves a terrifying genderless master religion that enslaves us all and makes us wear these gorgeous clothes. Sounds good to me.

Also falling into the supermodernity category is Lou Dalton. There is an easy simplicity to Lou’s designs which I appreciate, but for SS15 the clean lines and updated classics reinforced her modern aesthetic. Collarless bombers (worn over blazers), sleeveless macs and chunky plimsolls all smack of supermodernity.

For me Matthew Miller is the great unsung hero of LC:M. He’s always a season or two ahead of his contemporaries and never fails to present a challenging, forward thinking aesthetic. For SS15 I have to be honest and say there is a strong Raf Simons vibe to the collection but that’s fine by me. It’s a late 90’s Raf vibe, and nowadays the Raf aesthetic that I loved has become horribly diluted by the aesthetics of Jil Sander and Dior. What this collection channels is the intangible poignancy of teenage melancholia. The models wore Morriseyesque flower garlands adding a poetic beauty to the outfit especially when juxtaposed with the pinstripes.  There is a clever subversion at work when creating casual denim looks out of pinstripe, turning the material’s connotations of formal wear and suiting on its head. This aesthetic dichotomy combined with the velcro patches (featuring typically rebellious teenage proclamations like “Anti-Society“) are what made this one of the best shows at LC:M. It’s rare that I see a show and immediately begin fretting about whether or not I’ll be able to get my hands on the clothes before the show is even over, but that’s exactly what I was doing at Matthew Miller.

Richard Nicoll seems to be defining his signature aesthetic with each passing season. A few years ago I would have struggled to explain to someone what he’s about as a designer but with each new collection it becomes more and more evident. For SS15 futuristic fabrics, metallics and sleek styling kept everything modern and fresh.

I’ve mentioned this plenty of times before but I’m not a huge fan of Spring-Summer collections, especially for menswear. I’m pleased to say I was overall pretty impressed with LC:M this season – you can read about the stuff I was less impressed with next week when retro-fetishism gets what’s coming to it.