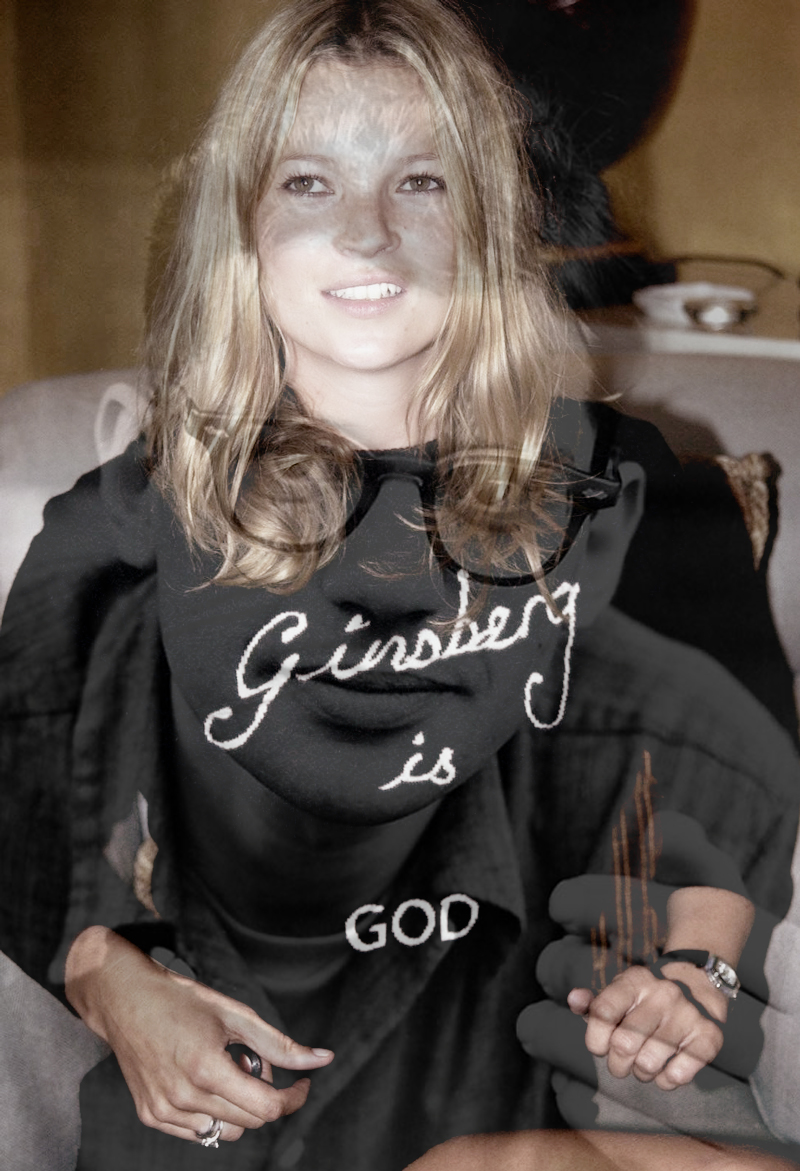 “I saw the best minds of my generation destroyed by madness, starving hysterical naked,”


I thought that would be a pretty good way to start a blog post, it’s an even better way to start a poem – but Allen Ginsberg takes the credit for that one. This is a post dedicated entirely to my long obsession with an iconic jumper by Bella Freud. It’s kind of like a slogan tee, if you could imagine a slogan tee transformed into high-art and loaded with cultural reference points. Having done a bit of research borne out of me becoming re-obsessed with the jumper a few weeks ago I discovered exactly how it came about…

“I made a short film with John Malkovich called Hideous Man about Beatnik girls waiting around at a club for their favourite poet to arrive for a reading. I wanted the leader of the group to wear a jumper showing her devotion to literature and art, a bit like a band t-shirt. I was throwing out names with my assistant, and Ginsberg is God tripped lightly off the tongue. ‘But what about Godard is Dog, I mean God?’ she said. Godard is Dog is what is written on the back of the jumper.” 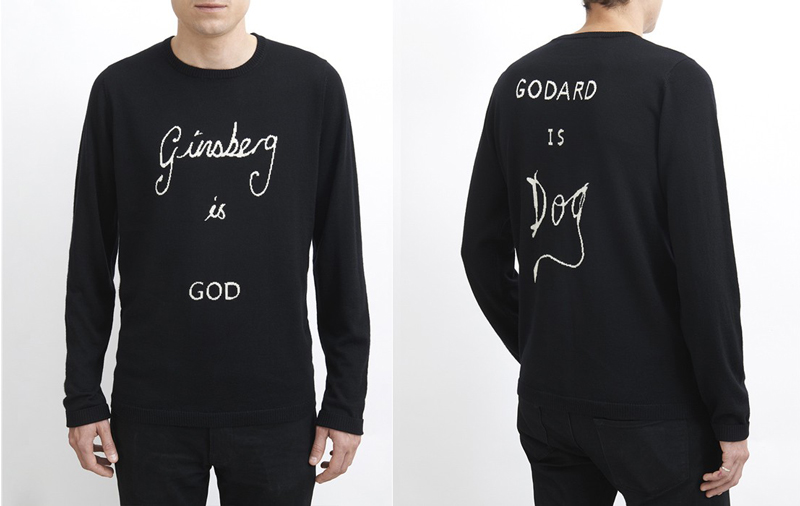 Thinking back I probably saw it first on Kate Moss in 2003, even though it was originally made in 2002. It quickly became an iconic image due to Kate’s superstardom – but it was the jumper I was obsessed with. I’m not sure there was a men’s version in 2002 – so buying it wasn’t really an option – just a rare instance of me becoming obsessed with an item of womenswear. I have an unhealthy obsession with beat poets – but while most would cite Kerouac as the master – it was always Ginsberg for me. The cultural impact of ‘Howl‘ is difficult to underestimate – in many ways it was the genesis of the entire counterculture movement that followed in its wake. The beat poets were rock stars of their time – much like the French New Wave directors. I’ve never been a huge fan of the French New Wave movement.  I’ve been forced to watch A Bout De Souffle more times than is really humane, which probably hasn’t helped. At some point between 2003 and 2007 (when Bella decided to begin a continuous production of the jumper) I had somehow imagined the jumper to say “Truffaut is God, Godard is Dog”. Something similar happened to Jane Birkin, as Bella recounts:

“I received a message on my voicemail from the agent of the legendary Jane Birkin saying ‘Jane has heard about your Gainsbourg is God jumper and loves it’. I had made a jumper with Ginsberg is God written on it. What to do? I decided to make her a jumper in the style of a schoolgirl’s dedication to her heroine: Je t’aime Jane with Gainsbourg is God on the back back, and Serge on the sleeve – where the heart is.”

Bella’s great-grandfather was Sigmund Freud and Lucian Freud her father; which goes some way to explain the artistry and intellect that typifies her designs. In fact the influence of Bella’s extraordinary lineage can be seen in everything from the ‘psychoanalysis’ jumper, to the new men’s jumper ‘Narc’  and the AW14 collection entitled “Transference”. It’s a rare commodity in the fashion world to have a designer so unashamedly entrenched in such opposing worlds and yet still be able to create garments whose aesthetic merits outweigh fleeting trends and somehow always look modern, always appearing chic and stylish. You can buy the jumper right now and that fills me with joy. Regret is a terrible feeling and I no longer have to feel like I missed out. Bella is still making jumpers worthy of obsession, dripping with wit and knowing, smart-ass references. Buy your favourite one now – or miss out forever!