This genesis of this shoot might take a little explaining so bear with me. I was searching for images for my tumblr recently – frustratingly there are loads of things that I can’t seem to find on the internet. Chief among the images I was struggling to find was an ad campaign by Helmut Lang from the 90’s where he re-appropriated photographs by Robert Mapplethorpe.

Lang is unsurprisingly a serious art collector. The centrepiece of his New York store featured a jaw dropping Louise Bourgeois sculpture of an Eagle. After Lang left the label in 2005 I returned to the store on  my annual pilgrimage to find the sculpture had been removed. I was told by a member of staff that Helmut had descended on the store with a team of art removal men to claim back the sculpture for his own personal collection. It’s not surprising that most of his artistic brilliance is focused on his own sculptures now, rather than on fashion. Mind you it’s a terrible loss for the world of fashion as far as I’m concerned.

So as a teenager I became fascinated with these Helmut Lang ads and subsequently with the work of Mapplethorpe. Printed in the pages of The Face and i-D this campaign was more fascinating and more provocative than anything I’d seen before; such was the might of Helmut Lang at the height of his power. Mapplethorpe’s obsessions with fetish wear, performance artists and male nudes are the greatest examples of his work, the portraiture of both celebrities and flowers have always for me lacked the confrontational ethos that Mapplethorpe used to reveal the aesthetic beauty of the sub-cultures that defined his life.

I knew that Richard (who we lovingly refer to as Photobot) would be able to create Mapplethorpe-esque shots for me, all I needed now were clothes. In order to get the look I really wanted I needed something monochromatic. Joseph Turvey‘s AW13 collection was the obvious choice, I had been literally blown away by it at LC:M. Dalmatian prints and edgy street wear combined to make a fascinating collection comprised entirely of black and white. Any fashion editor or photographer will tell you that black clothes are nigh on impossible to shoot without losing all the detail; but that’s not necessarily aways true. Turvey’s luscious knits are intricate and textured, all I needed to do was create some juxtaposition  –  the matte leather of the fetish mask and the shiny iridescent patent leather of the Jeremy Scott for Adidas wing boots were perfect. Place the boots on a pedestal and they become a sculpture in their own right. So with thanks to Helmut Lang and a nod to Robert Mapplethorpe… Here it is.
All clothes by Joseph Turvey, boots by Jeremy Scott for Adidas (from Offspring) 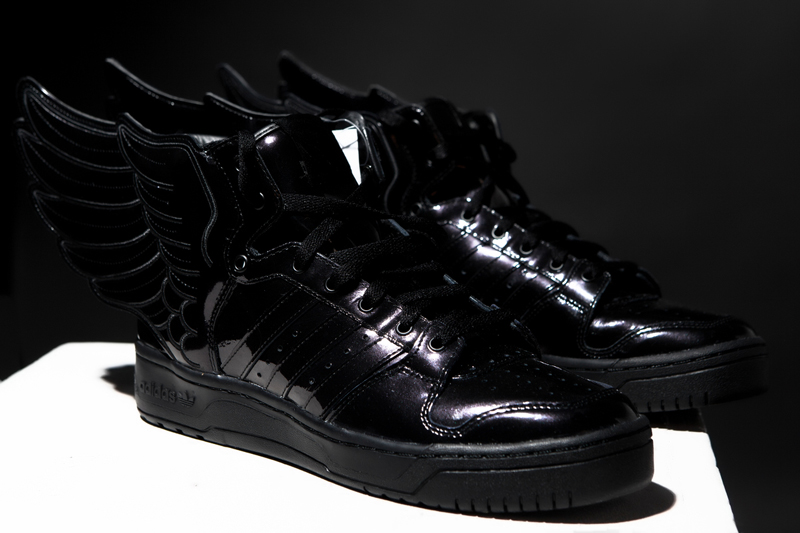 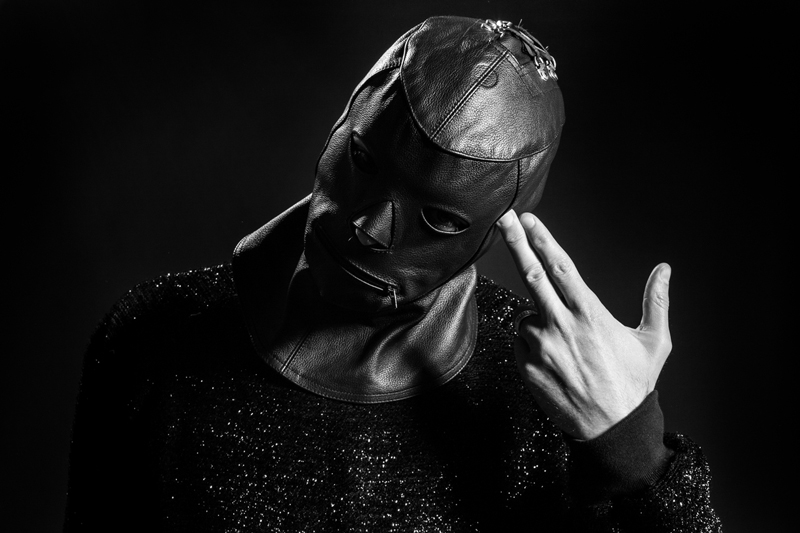