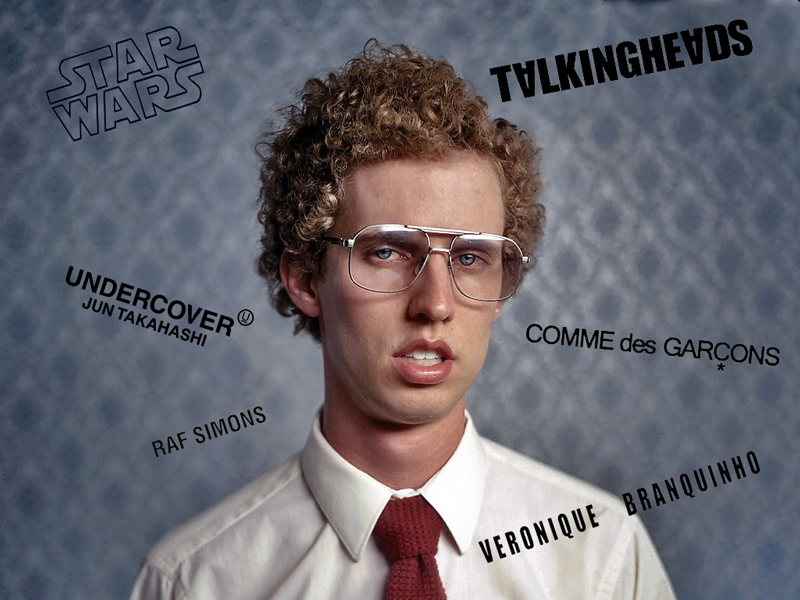 Cult Japanese streetwear label Undercover has produced a collection inspired by the Talking Heads, one of my favourite bands. Various pieces of album artwork and the awesome words of David Byrne appear emblazoned across jumpers, t-shirts and shirts. So here’s the conundrum – if I love the Talking Heads and I love Undercover then why can’t I get excited about this collection? When I heard that Comme Des Garçons were making Star Wars clothes I was so excited I almost puked – two of my favourite things, collaborating. That’s bound to be awesome, right? But when I saw the t-shirts and bags on offer I was pretty disappointed: they were boring. As a massive nerd, I know I can get literally hundreds of better designed Star Wars t-shirts that won’t cost you more than £15. Paying £85 for a boring Star Wars t-shirt, just because it was made by Comme Des Garçons, seems like a waste of money to me. 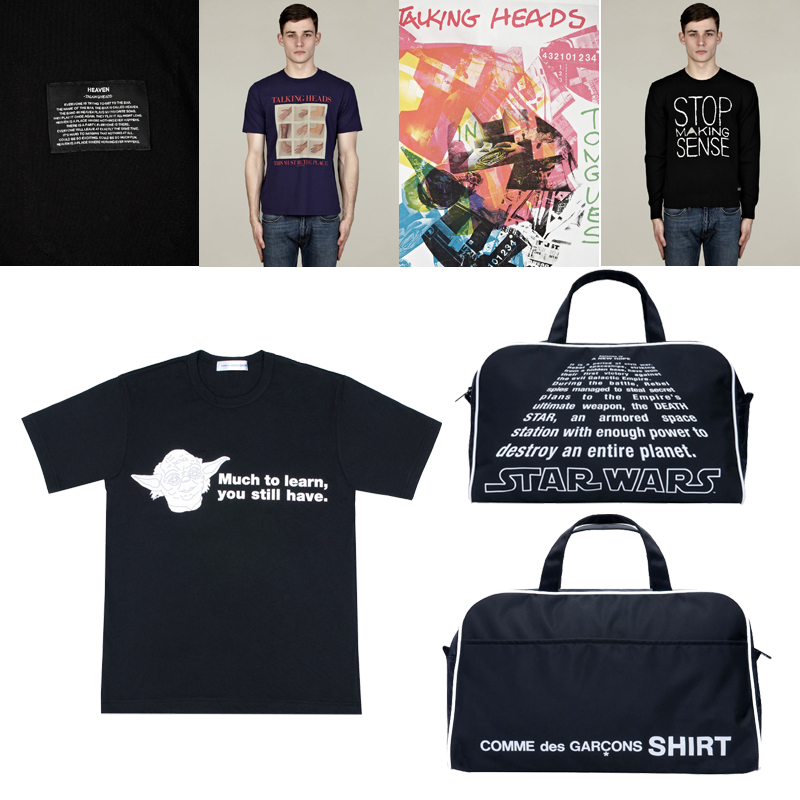 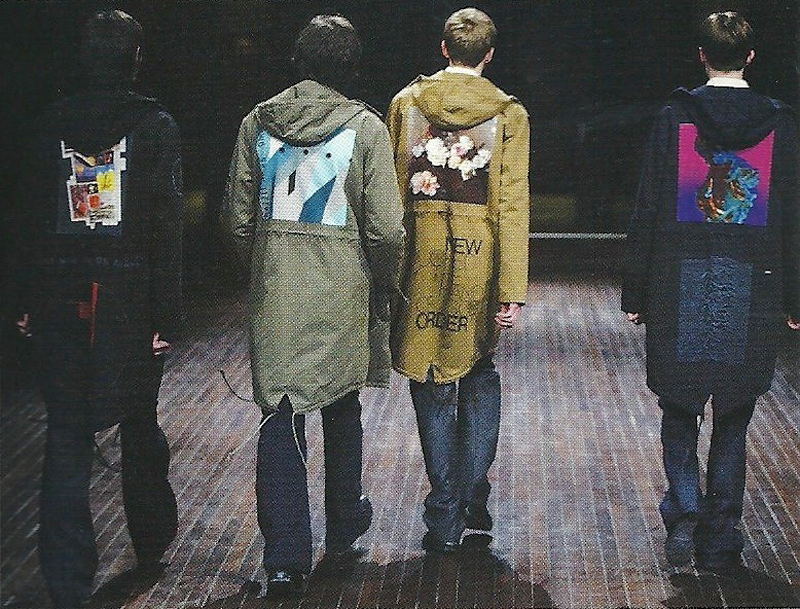 Raf Simons
When Raf Simons used Pater Saville’s Joy Division and New Order graphics and splashed Ian Curtis’s words over his collection the effect was extraordinary.  Raf succeeded because he didn’t just reproduce a Joy Division t-shirt. Raf aligned himself with a cultural phenomenon that evokes the same teenage melancholia that his aesthetic aims to do. Raf added to the Joy Division mythos – expanding that brand into cultural circles it didn’t traditionally belong in. In 2004 Veronique Branquinho made a collection inspired by Twin Peaks. No slavish reproductions of the Twin Peaks costumes – but instead an extension of the Lynchian aesthetic, modernised and augmented for the purpose of fashion. 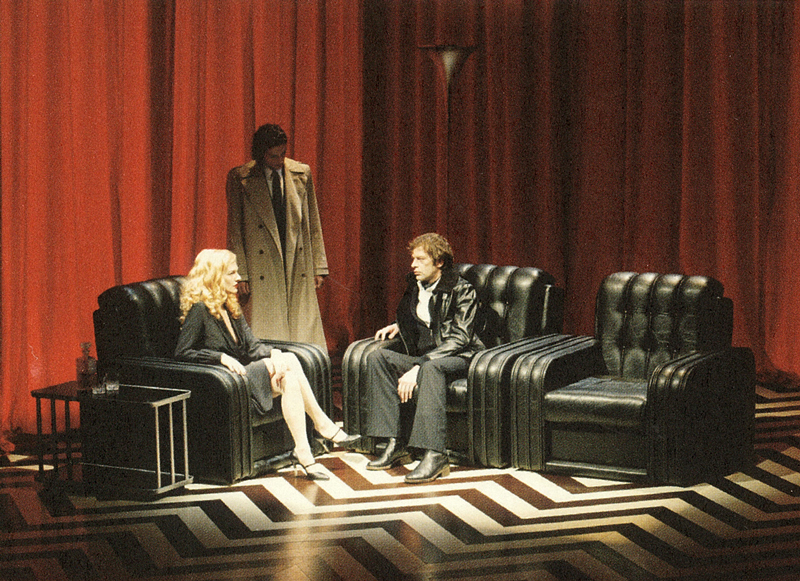 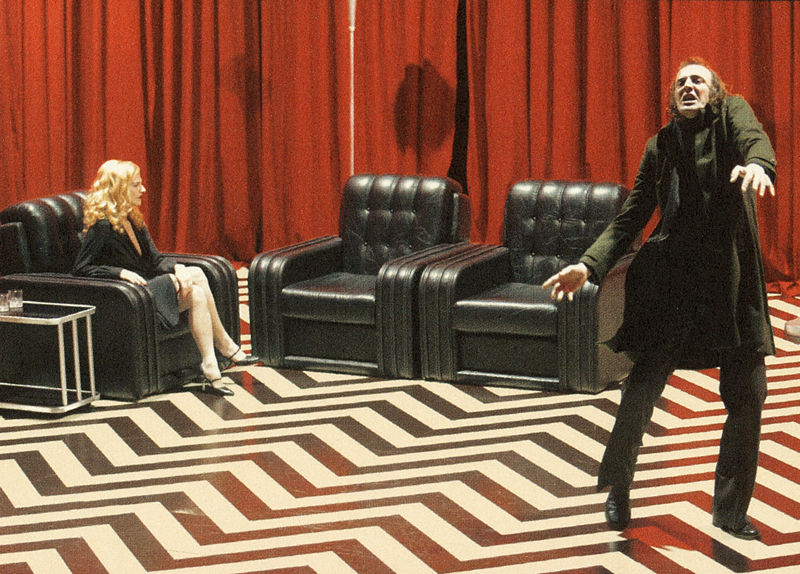 Veronique Branquinho
Clothes act as a highly complex system of signifiers that when subjectified reveal aspects of our personalities, tastes, class etc. It’s a language of its own and one that, subconsciously, we are all fluent in. Brands and logos dismantle subtleties of perception and project the ideas perpetuated by the brand behind the logo. So do the Comme Des Garçons/Star Wars or Undercover/Talking Heads collections aim to straddle these divergent cultural aspects, meshing them together in order to provide the wearer with the ability to convey a knowledge of both fashion and the geeky subcultures of sci-fi movies and new wave bands from the 80’s? Or is it a crude way for fashion brands to borrow the cache of other cultural phenomena and charge us for the privilege of being a fan?
Comme Des Garçons are no stranger to the cult of branding. Previous collections have featured excessive use of other brands and logos from the Rolling Stones lips to the Beatles Yellow Submarine. These iconic logos were turned into a mind-numbing tapestry of repetition, printed all over trousers, blazers, t-shirts and anything else you could think of. Was it a comment on capitalism and brand power? Was it an attempt to turn the logo, as a capitalist expression, against media culture? Was it detournement?  It seems to me more like a case of ‘culture jamming’, but without the political rhetoric behind it. After all we’re talking about Rei Kawakubo here, not Noam Chomsky.

Comme des Garçons
So while I initially jumped at the chance of purchasing both the Undercover collection and the Comme Des Garçons Star Wars pieces I think I’ll save myself some money and buy neither. If I want a Star Wars tee I’ll buy one in Forbidden Planet and if I want a Talking Heads tee I’ll look on eBay.
Follow me @RobotMonsieur