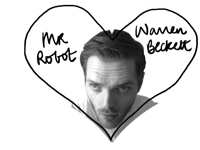 The V&A is one of my favourite places in London, if not the whole world. Apart from a fantastic permanent collection of fashions including iconic early Westwood pieces and clothes dating back centuries, it also puts on some of the best and most comprehensive exhibitions. The current show Postmodernism: Style and Subversion 1970-1990 is pretty mind blowing. It’s an exhaustive look at the movement through art, music, fashion, architecture, well everything really. A lot of what is on display had never really struck me as ‘postmodern’ mostly I was reminded of the 80’s, but looking at these things objectively its easy to see how in retrospect postmodernism was reflected in design of all kinds, and how it slowly permeated popular culture until it all but lost its aesthetic merit and fell out of favour. I’m not going to try and explain postmodernism to you, nor elaborate on the mind blowing lecture I had on ‘supermodernity’ recently because that would bore you to death, so here are some pretty pictures instead! La la la la la….

Terry Jones pioneering work for i-D features prominently in the exhibition and so it should. i-D has always been on the very pulse of art and cultural movements and its cover design is rarely short of jaw dropping.

Robert Longo’s Men In the City Series also form part of the exhibition and while these portraits  don’t exhibit the garish colours or exuberance of much of the other art on display they’re just as postmodern. Untitled (Joe) which is pictured above is constantly being remediated and re-appropriated for contemporary use. You might have seen Longo’s work on the walls of Patrick Bateman’s apartment, along with some Cindy Sherman ‘Film Stills’, in American Psycho. You can say what you like about Patrick Bateman but the man had style.

Last but not least is Miss. Grace. Jones. Pretty much everything Grace Jones does is stylish, it’s  just how God made her. However, the works created by her and Jean Paul Goude stand out as the most unashamedly glorious examples of what most people recognise as postmodern, typifying the aesthetic of a whole decade and beyond. It’s gaudy, vulgar and over-the-top, in short I LOVE IT. The maternity dress below is almost good enough to get pregnant for. Almost.