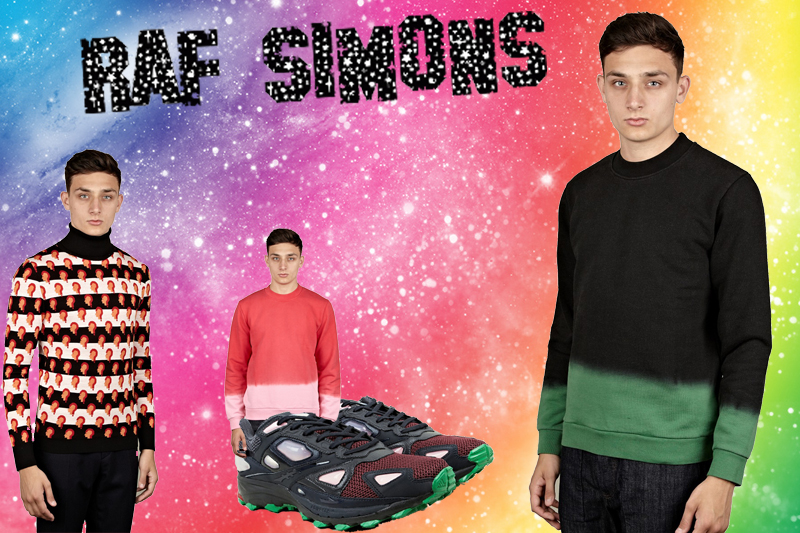 We’re in that particularly awkward part of the year when Autumn/Winter clothes start trickling into shops while it’s still sunny and hot outside. The idea of trying on, not to mention buying, anything more than shorts or vests at the minute seems ridiculous. Still it’s a good time to shop if you can work out what you want to wear later in the year because smart asses (like me) will buy up all the good stuff while you’re lying in the park soaking up the last of the Summer rays. Anyway me and Mademoiselle took a jaunt to Opening Ceremony recently, this shop has fast become my favourite place in all of London. I lose all control of myself as soon as I get through the front doors. I’m in the changing room with clothes that cost more than some people’s first house thinking to myself “Rent? Who needs to pay rent? I look so hot in this“.

I know I bang on about my love for Raf Simons with mind-numbing regularity but when I saw the pre-fall collection in Opening Ceremony I went weak at the knees. I have a profoundly complicated relationship with Raf – at its best it’s almost romantic. We’re on good terms at the minute because he’s at the top of his game and consequently my wishlist is comprised of nothing but Raf. Just like the good old days – check out some of my picks below.

The latest instalment from the Eastpack collaboration features a couple of different colourways but I wont waste your time with all of them because the black and white striped Beetlejuice number is the one.

Raf did dip-dye a few seasons ago and in typical form the high street completely ruined the trend with a flood of cheap copies – so I’m a little surprised that he’s brought it back again. I still love it though, along with the new head/question mark logo.

Last but not least is the Raf x Adidas collection. They’re basically a variation on the trainers his signature label has been making for a while but now in several almost imperceptibly different colourways and two nearly identical styles. They’re a tiny bit cheaper than the original Raf ones. It’s a curious design, almost intentionally naff – like the kind of cheap running shoes that you see fat middle aged men wearing with their suits on their way to work in the city. Still I love them, I need more shoes like I need a hole in the head, but these will be mine eventually *shakes fist at the sky*.