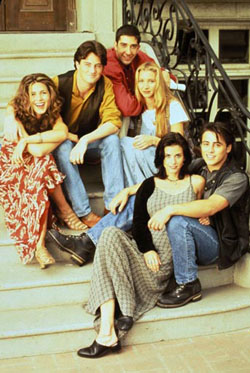 There is something about the first season of Friends

, before Jennifer Aniston started sporting the trademark “Rachel”, before Matt LeBlanc became chubby, before Matthew Perry struggled with various addictions. One of my goals for the holidays is to watch all 10 seasons of Friends with my husband, in the hope to make the Winter tv break more bearable and maybe to fully embrace the ghost of Christmas past and a certain nostalgia for the 90s.

Friends was made before TV shows became yet another platform to publicise the work of designers. It is more representative of the “real” style of the 90s and less “fantasy of the costume department”. These days, apart from shows like CSI

where fashion is completely irrelevant, product placement is just as obvious when it comes to clothing than when showing off a new tablet computer.
Watching Friends now, when the 90s revival is on everyone’s lips is very inspiring because of the authenticity of the characters’ style. Of course I could just look at photos of my teen self in 1994 and reproduce my own style back then, but it wouldn’t be the same. I was a teenager, and I don’t want to dress like a teen from the 90s at 32. However, I don’t mind taking a page or two out of twenty-something Rachel, Monica or Phoebe’s book… and while I don’t want my closet to look like a time-machine, watching the show reminded me of some good stuff from the 90s. Good sartorial ideas I couldn’t understand back then because I was too young.

As we were watching episode after episode of the first season, I kept thinking about ways to incorporate Monica, Phoebe and Rachel’s style in my wardrobe, in a grown-up way… so on Polyvore I went!