As you know, I was invited to the Ashish show but was unable to go as I also had to cover the launch of the Madonna exhibition, last friday. So I offered to give my ticket to a fellow blogger in exchange for a little guest post about the show. Reena from Fashion Daydreams was the lucky lady, and here is what she has to say about it… 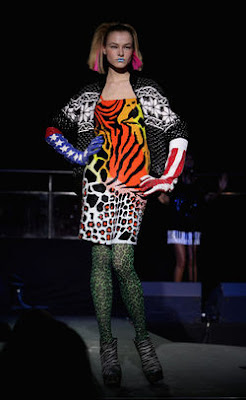 Fashion Week has arrived! Mademoiselle Robot kindly gave me her invite to the Ashish show, which is how I found myself queuing up in a side street with some rather fabulous young things on Friday. Anticipation was building, I could overhear several people talking about the playful, fun nature of previous collections. I found myself pulling the oversize cardboard ticket out of my bag, it looked like a ticket for a carnival or a circus. This theme continued inside the venue, with an acrobatic circus performer keeping the growing crowd amused, before VV Brown strutted on stage to cue the beginning of the show.

And what a show it was: a riot of colours and sequins, clashing neons and animal prints. Texture, circus-inspired neons and of course sequins were three of the staple themes of the collection. The first few looks were very full on and took a little getting used to. Neon green and pink Sprouse-esque leopard print coupled with a sequin skirt and pink zebra print leggings isn’t the most wearable of outfits! But, deconstruct the outfit into individual pieces and it starts to look a lot more wearable. The light-hearted, witty pieces are definitely very covetable. 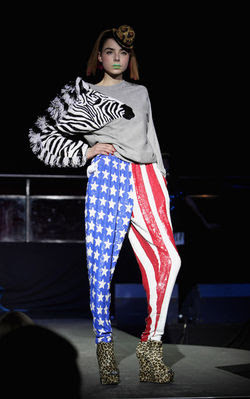 After seeing the show first hand, it’s very easy to understand the hype which was building up in the queue. Ashish’s Fall 2009 collection literally dazzled, the circus/carnival theme suddenly seems like a no-brainer antidote to the muted, sombre tones seen in some other Fall collections.