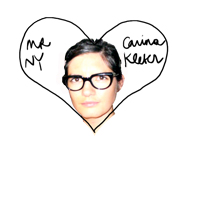 There’s a nasty cold sweeping the nation; last week MRLA succumbed, this week it’s me, in New York, and of course at the worst possible time – Halloween time! Most probably my most favorite holiday. And guess what else? It snowed! Not a little drizzle, no, but full on. That’s two obstacles standing between me and my beloved Halloween. (Well, the celebrations thereof, which happen on the weekend, and besides I have other plans on Halloween day – I’m going to see a live taping of the Conan show! ♥ ♥ ♥).
I’ve already gone on about my love for Tim Burton, so I’ll spare you the gushing over The Nightmare Before Christmas being my Halloween and Christmas classic, and how I used to have a crush on Jack Skellington and wanted to look like Sally, even though she was a stitched together doll whose arm kept falling off. Instead, I will gush about warm, sweatery things, in an attempt to channel feelings of warmth, and also to plan my winter wardrobe because apparently winter decided to come two months early this year. Though sweatery and Halloweeny need not be mutually exclusive, as you can see from these snuggly, sweatery, animally robe things from Urban Outfitters…

Owl, Penguin, and Tiger Buddies, from Urban Outfitters.
…or these amazing wearable blankets from Vík Prjónsdóttir, an Icelandic brand that looks to mythology for design inspiration.

But I digress. Let me be clear what I mean when I say “sweatery.” The emphasis is on the “y” part – I’m really talking about tights that are made of sweatery textiles. I think it’s really cute how the fashion world divides seasons into autumn, winter, spring summer, but I like to wear whatever I like whenever I like to wear it. Mostly this means wearing springy/summery things in autumny/wintry weather, and to accomplish this fashion feat while maintaining a modicum of comfort, well, that’s where tights come in. You can make anything into winter wear with the proper tights and coat (even bodysuits! I’ve done it before and I’ll do it again!)!
Tights have been a staple in my wardrobe, since, well, forever (at a Halloween party this weekend I met a girl, dressed as an Italian widow with black eyeliner tears streaming down her face, whose mother, having grown up in Soviet Russia, only came to know tights in her adulthood – so sad, so cold!). My go-to tights, especially of the woolen variety, have come from Hansel and Basel since a friend tipped me off to their fun patterned tights and socks a few years ago, with a supporting cast consisting of Wolford’s shiny tights, Anthropologie’s lacey tights (though I am such a klutz and constantly ripping them with my rings), and American Apparel’s fun colored opaque tights (like, every color you can imagine).

American Apparel opaque pantyhose in various colors (we’ve all seen our fair share of American Apparel ads, I know, but this one is just so wholesome, I had to include it)
Follow Carina – twitter