I sometimes (oftentimes) wish my eyes could take photos. Everyone is always on their smartphone-that-take-photos so it can be pretty easy to sneak a pic of someone’s awesome/insane something or other, but people move so fast that by the time you’ve pulled your photo-taking device out, ten other photo worthy people have power-walked on by. Yesterday, on the subway ride back from a failed expedition to the closing weekend of Alexander McQueen: Savage Beauty

at the Met Museum (the line was eons long and I had dinner plans – I’ll try again today, the last day before they return these beautiful pieces back to the various archives and collections from whence they came), I was in agonies over not being able to photograph a woman dressed to the nines, make-up and hair included, in a pristine 40s era vintage dress.
She made me think of Vivienne Westwood, though she didn’t quite look like her. It was her sort of austere look, the redness of her hair, the tailoring of her dress which was actually more reminiscent of a restrained Vivienne Westwood design than the kind of audacious clothing that Westwood outfits herself in. Her face was all angles, her brows shaped to a straight line reaching toward her temples, her hair held up by pearl combs, with earrings to match. The dress was a long sleeved, slim fitting, three-quarter length pumpkin colored number, wool from the look of it, with a flouncy ruffle in the back that made me wonder whether, like Scarlett O’Hara, she’d made the dress from draperies.
Much as the woman herself called to mind Vivienne Westwood, her look called to mind Luca Luca’s Fall 2011 RTW collection. Full of mustard, pumpkin, egg yolk, olive, and deep watermelon, interspersed, and sometimes magnificently paired, with shiny, pale gray, milky white, and soft (sometimes bejeweled) black, the collection successfully pulls off a modern take on vintage style, preserving the kind of cuts that accentuate and flatter a woman’s curves, adding simple patterns and complex textures and layers. 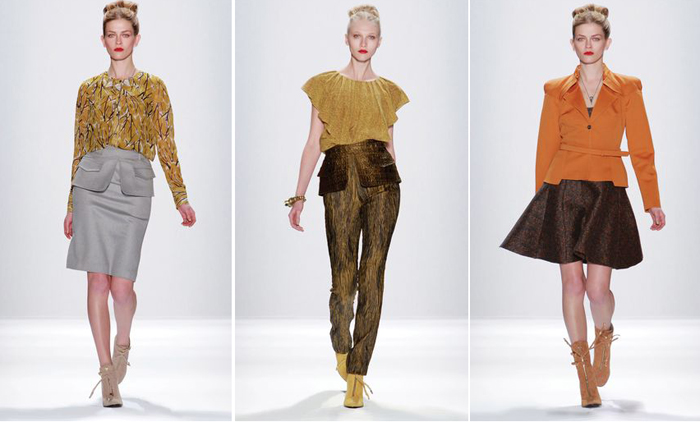 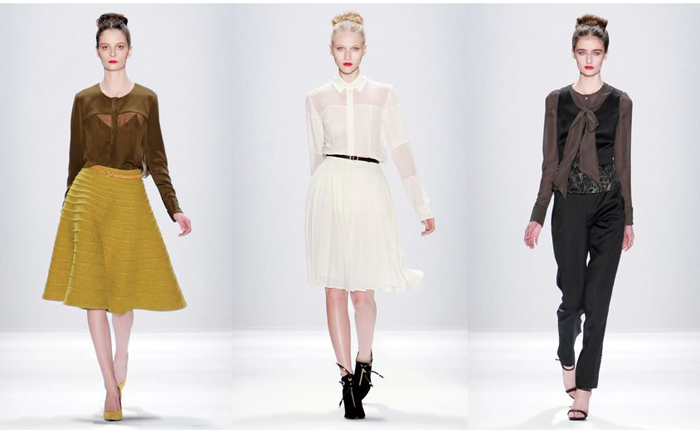 My large behind is much better suited to full skirts/full skirted dressed, but I have dreams of wearing this stylin’ working gal pantsuit, though probably with a brighter blouse, like the mustard patterned one in the first photo. 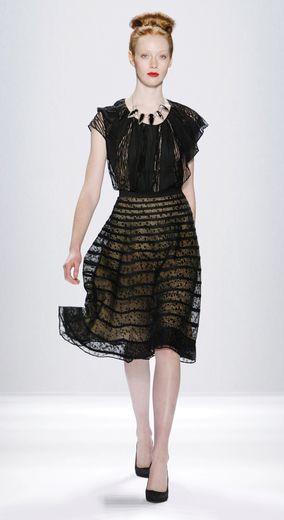 This black dress reminds me of a beautiful vintage piece I picked up several years ago, when I was living in Chicago. I usually wear it over a black or white slip, but also love wearing it over another patterned dress – you can just barely see the pattern through the fabric, but it’s just enough to make it interesting. 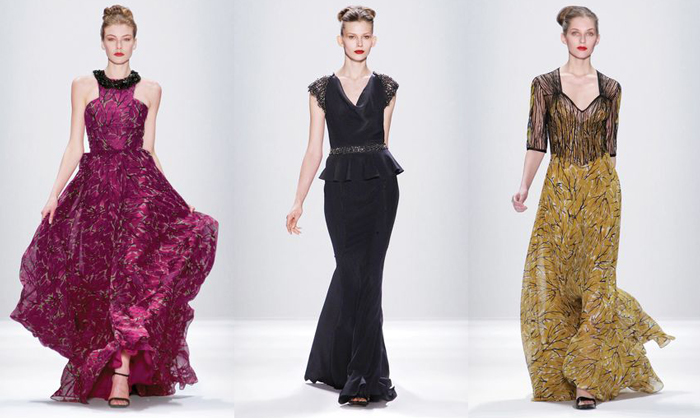 My favorite part of any collection is the elegant, flowy gown part, and this collection is no exception. I also love the black lace top layered over the mustard patterned dress – the perfect answer to a chillier evening. You still get to see the full beauty of the dress through the delicate and intricately woven fabric of the top.
Words by Carina Kleter
Images courtesy of Luca Luca
Follow me – twitter – bloglovin – rss – tumblr – MCM blog.