Men don’t
come anymore stylish than Casey Spooner. The first time I saw him I took all my
ideas about fashion and threw them away, I knew I had to start again. Casey
embodies both sartorial elegance and avant-garde fashion while maintaining a
never-ending succession of unique and inspiring looks. Taking a break from his
groundbreaking work with Fischerspooner he’s just released a solo album and
true to form it’s brilliant; and completely different to anything he’s done in
the past. A classic, modern sound with all the ingenuity and innovation you’ve
come to expect, it’s called Adult Contemporary and is available now on www.caseyspooner.com and iTunes. I spoke to Casey about making
the new record and of course his own personal style.
How
was the experience of recording your new solo record?

The
thing that’s kind of unusual is that I didn’t plan on making a solo album. I was
writing material for Jeff Saltzman who had produced the last Fischerspooner

record with us. So I went in just writing stuff for him because he wanted to
make his own album and in the process I got to just writing so much stuff he
decided to take the material and make it an album for me. So it was kinda cool
for me because I wasn’t planning on it and when I was writing I was, you know,
I wasn’t even recording the vocals thinking that they were gonna be the final take
so I was doing demos that I imagined other people would re-sing later. I was
very relaxed I wasn’t super self-conscious. We were working quickly so I ended
up writing stuff that in a way is more natural, more personal. 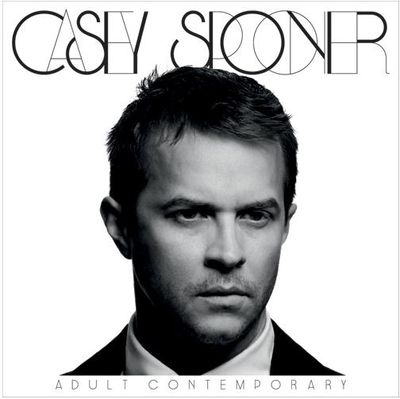 Did
you consciously want to change musical styles? It’s very different to what you
do with Fischerspooner, is that something you wanted to do?

No! I
wasn’t thinking about it, it wasn’t a choice. I was just writing stuff for him
and his album so I wasn’t really thinking about making any of those choices, I
was thinking, is this my next persona? Is this good for my career? Is this bad
for my career? Is this what I want to say? It was more like I was just very
un-selfconsciously writing material for his album.
So
it just happened organically?

Yeah,
so a couple of weeks into recording he basically started saying that he felt
like it was mine, and I was like “woah, wait a minute! I don’t know” and then I
thought, you know what? Why not. It’s true there’s like a natural thing
happening so why don’t we just go with it.
Cinnamon
toast is a stand out track on the album…do you have a good cinnamon toast
recipe?

God
it’s so crazy, everybody loves that song. It was the first song that I recorded
and I made it really, really fast. I recorded and wrote the entire song in
maybe two hours. It’s the story of my third birthday party.
Does
the change in your image correlate with the change in musical styles? Do you
think the two things are symbiotic?

I knew
that because the sound was a bit more classic, I wanted to create a more
classic image. I’m just coming off of wearing a giant neon lampshade on my
head. So I thought I wanted to go the opposite direction. It’s more exciting in
a way for me to do something classic and handsome. 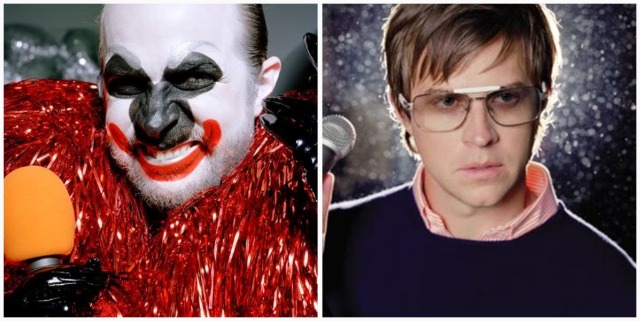 Oh
yeah, absolutely.
In
the video for “Spanish Teenager’, the single from the album, you’re not really
wearing any clothes…does that mean you’ve run out of looks?

I know! I’m
post-clothing…I’ve worn everything.
So what
music do you
listen to?

I was just
listening to the new Beth Ditto Simian Mobile Disco EP.
What are
you wearing right now?

It’s
fucking freezing here; I’m wearing a giant coat I look like an Eskimo
basically.
How do
you dress on your ‘off’ days, if you’re just sitting round the house, or you’ve
got to pop to the shop to buy some milk, do you dress up or do you wear normal
stuff like everyone else?

When I’m
off, I’m OFF. My favourite things are really good underwear and really good
socks and so basically I’m probably just in socks and underwear.
Who are
your favourite designers at the minute?

Gosh, let
me think. I feel like I’m off the circuit at the minute. I always love Rick Owens, I always love Gareth Pugh. I’m doing a lot of work with Timothy Everest,
who does bespoke suits for me. I was just looking at some vintage Mugler. Italo
Zucchelli does great stuff for Calvin Klein. I always love Margiela…you know
all the basics. Oh you know who I’m really into a new designer I just
discovered from Korea called Juun J. 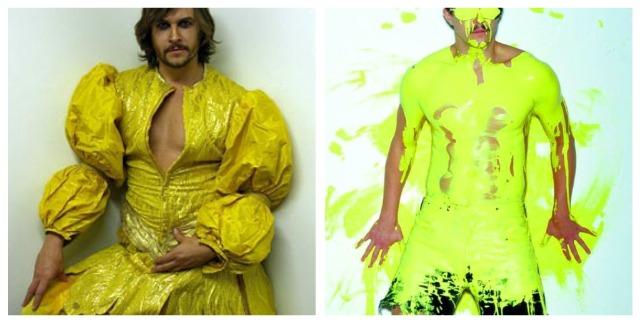 You’ve worked with designers like Stefano Pilati
and Jeremy Scott in the past, what’s that process like? Did you collaborate in
the designs or act more like a muse?

I love Stefano and Jeremy. It’s been a long time since
I worked with Jeremy. Typically early on I have a core concept or an idea I’m
trying to execute so I tell people where I’m headed and then I just let them
run with that idea. Stefano made a whole bunch of clothes for me that I didn’t
anticipate at all. I was into toreadors and he turned round and gave me this
kinda crazy chinese sci-fi collection. That was a complete surprise, I was just
trying to borrow some clothes off the rack and that’s what he gave me.
Do you have a favorite outfit that you’ve worn in
the past, perhaps on stage?
Oh man, there are so many! I love to change. I love to
change my look and go to extremes. My first Fischerspooner look is still one of
the best. I made a suit out of human hair. I was like a big glamorous monster.
It was so lush and silky. Not like a dirty ugly monster. More like a shampoo
commercial. The hair moved so beautifully. That’s a CLASSIC look. I love the
neon hat I made for the last show. That thing is so insane. I just want to make
another one that is even bigger and better. I love how it looks technical and
religious. A showbiz halo. 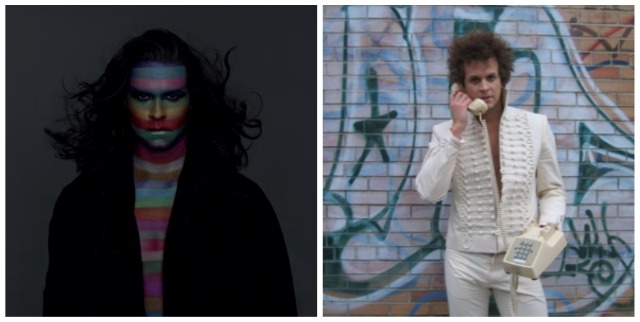 Are there any fashion faux pas you’ve made?

NEVER. I don’t believe in mistakes. Well, at least not
on stage. I put a great deal of thought and effort into the show looks. Even if
they seem “off” it is intentional.
Sometimes I really fuck up in real life. But I don’t
really care about real life.
How long does it take before you get bored of a
look?
I’ll get a concept for a look and keep refining and
redesigning it for years. It takes me about a year to figure out a look and I
can keep developing it for another year. 2 years is kinda the perfect amount of
time. But I am about to redesign the current FS look AGAIN. I have been
developing the ENTERTAINMENT image for about (off and on) 4 years.

Now I am busier with the Casey Spooner image which is
the anti-thesis. Clean, adult, classic, sophisticated. I like to swing between
the extremes of avant-garde fashion and very traditional elegance. Sometimes I
am able to pull both off at the same time. And that is what I like most.
Something that is now and very fresh but still elegant and refined. Strange
Elegance is my thing.
How many wardrobes do you own?
I have a storage space full! and my closet is a
nightmare. If I am not on tour I am just wearing jeans or whatever is on top of
the pile.
Do you keep all of your old clothes or throw them
away?
I keep all the good stuff!!!
What are your wardrobe staples? Is there an item of
clothing you can’t live without?
I know this is gonna sound crazy but I am most
obsessive about socks and underwear. I love Hanro and Falke for underwear. I
love Wolford, Falke, Fogal, Brioni, Panterella for socks. Panterella socks are
the best. If I have great socks and underwear and T shirts. I can make ANYTHING
look good. Just add shorts and a great pair of boots and a hat and scarf and
sunglasses.
I need that Givenchy leopard suit from last season. I
know it is going to be everywhere but I just NEEEED it. Mens? Leopard? Suit?
YES!
Is there anyone out there that you think is better
dressed than you?
Daphne Guiness!!! is the best dressed HUMAN BEING.
But other men??? I can’t think of many men or at least you don’t see them
in the press. I am always inspired by very traditional and folkloric costumes.
I love the Macedonian costumes in Greece and the kids in Tokyo and gaucho looks
in Argentina, etc etc….I am crazy for these kinds of indigenous looks.
Is a sense of style important in a potential
partner? For example would you consider dating someone that you considered to
be badly dressed?

Yes. I love a hot slob.
You sing about London on Adult Contemporary… Do
you think Londoners or New Yorkers are more stylish?

Very different. I think that England is always dealing
with intense class issues. It manifests itself in the way people look and act.
There are these extremes of people trying to be proper and very improper. I
love both. The super super trashy club looks and the very up tight traditional
looks.
New Yorkers are bit more “street”. We have
to dress for an almost athletic existence so it is about functionality and
looking chic.
Who is your style
icon?

CONTRADICTORY
Do you have any style advice or fashion tips for my
readers?

Real style is about ideas. I find a concept or a
philosophy and pick things around that. It may be something like ATHLETIC
COUTURE or OUTER SPACE JAPANESE VAUDEVILLE. It is fun to choose things that are
seemingly unrelated and find a way to pull them together. Visually and find
connections conceptually too. This always yields something interesting.
Otherwise just wear one color and you will look good.