Has someone ever stopped you in the street and asked where you got an item of your clothing from? It’s happened to me only a couple of times. I always proudly tell them where it’s from as it’s basically a really nice compliment. I’m a bit embarrassed to do it to other people most of the time. Once I asked some guy on the tube where he got his coat from, he sneered at me and said “I don’t know, it was a gift”. That was clearly a lie, and in retrospect the jacket wasn’t even that nice. There’s no need to be rude to people, especially when they’re complimenting you.
Once in New York I asked a guy where he got his Nikes, he very smugly replied, “Oh I work for Nike, I had them made especially for me”. Asshole. Someone else told me his shoes were from South Korea. Really? I went to Paris once to pick of some Dior Homme trainers but South Korea is a bit too far…
Anyway long story short on my way back into town from Marc Jacobs last week (we’ll get to this later) I saw a girl in the most amazing hi-tops. They were leopard print with gold studs all over them, amazing. I didn’t ask her where they were from as I didn’t want her to think I was coming on to her, or that I’m a transvestite, but when I got home I googled the description and found them! Hooray! They’re by Christian Louboutin! Boo…They won’t come in men sizes and even if they did I couldn’t afford an empty shoebox in that store. 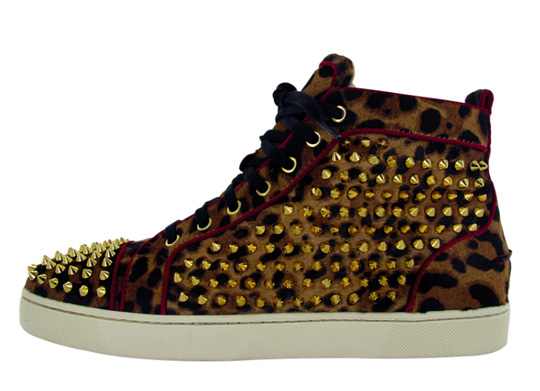 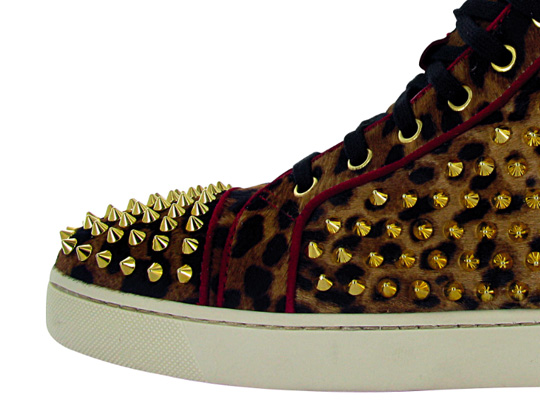 What I had seen in Marc Jacobs, however, were some stunning new hi-tops in his signature collection. Not as wide or bulky as his men’s trainers normally are these looked perfect. I’m going to wait for the January sales to see how much of a discount off £320 I’ll get. It’ll have to be a big one. I have been trying to wean myself off trainers. The current men’s trend for brogues and smart clothes doesn’t work with Converse and Vans. But after less than a year of only occasionally wearing my smart shoes I still feel like I’m playing dress up in them.
If trainers are truly beautiful, well made in gorgeous materials, you should be able to wear them wherever you want right? I wouldn’t be impressed if someone criticised me for wearing Lanvin hi-tops or these chic corduroy Raf Simons trainers. I’m going to keep wearing mine whenever I want. 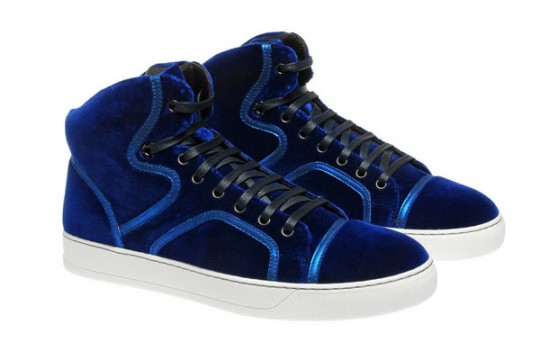 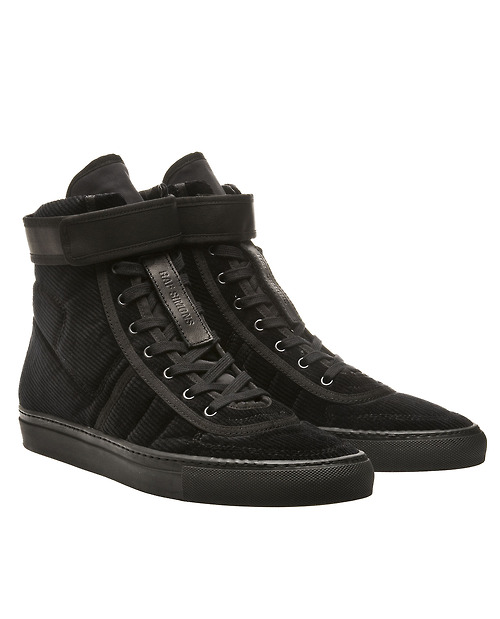 At what age is it inappropriate to still wear trainers? I’m only 31 but I’m also one of the few men in my office who doesn’t’ bother to abide by the ‘smart casual’ rule. I haven’t gotten in trouble yet but I suppose if I do I really will have to smarten up. If my trainers cost more than a pair of cheap brogues I should be allowed to wear them at work right? That seems fair to me. No-one ever stops and asks someone where they got their bland ‘smart casual’ work outfit from, right? Exactly.