I love nothing more than seeing a talented crafty lady make her way slowly but surely to the top of the fashion cake. Angie, the beauty and brains behind Norwegian Wood is one of the best examples of “ladies doing it for themselves” I can think of. I hope this interview will inspire you to always believe in yourselves and follow your dreams (what I am saying is totally cheesy, but it is a true story). 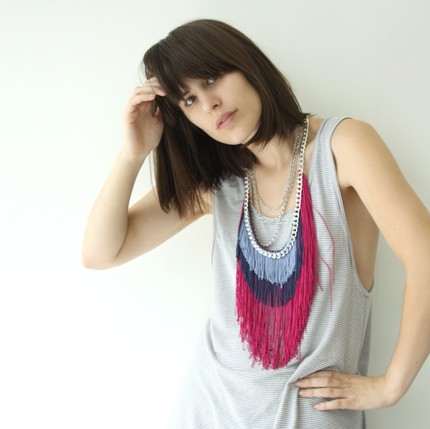 Angie wearing her Maximum Fringe Necklace
What’s your background?
Quite a mash up actually! On my mum’s side: British, Scottish, Métis (a mix of European immigrant and Canadian Aboriginal), On my dad’s side: Norwegian, Swedish, British.
How did you start Norwegian Wood?
I had been working in the mainstream fashion industry for about 8 years, in various positions (started at the VERY bottom, worked my way up to head designer) at 3 different companies. When the last company I worked for decided to shut its doors, I decided it was time to take the leap and work for myself. I figured that if I couldn’t even have stability and security in a head designer position for a large company, then why not just work for myself?
Luckily I had dabbled in having my own clothing line on the side since I was 16, so it was not an entirely new venture for me. The scary part was making it my main source of income. My fiancé and I also run an art gallery/indie designer boutique here in Montreal called Headquarters Galerie + Boutique, so going full time with Norwegian Wood meant that now BOTH of us were fully self employed, which was a bit scary too.
Where did you grow up?
I grew up in a teeny, tiny small town (about 400 people) in rural Manitoba, about 1/2 hour outside of Winnipeg (the capital and largest city of Manitoba). The town is called Starbuck, which used to be fine… before a certain chain of coffee shops opened. Now people seem to think it’s a great and original joke that I couldn’t have POSSIBLY heard before.
Overall growing up in a small town was great as a child, but around age 14 I was BEGGING to go into “the city” (Winnipeg) as much as possible. Thankfully my parents understood my creative streak and enrolled me in as many classes (ie. dance, art, piano, etc) as they could, so I was able to get into the “big city” once in a while and get my creative fix.
What inspires you?
My inspiration comes from many places, and kind of changes every season. The main things I find myself inspired by are the fabrics themselves, art, books, movies, the usual. 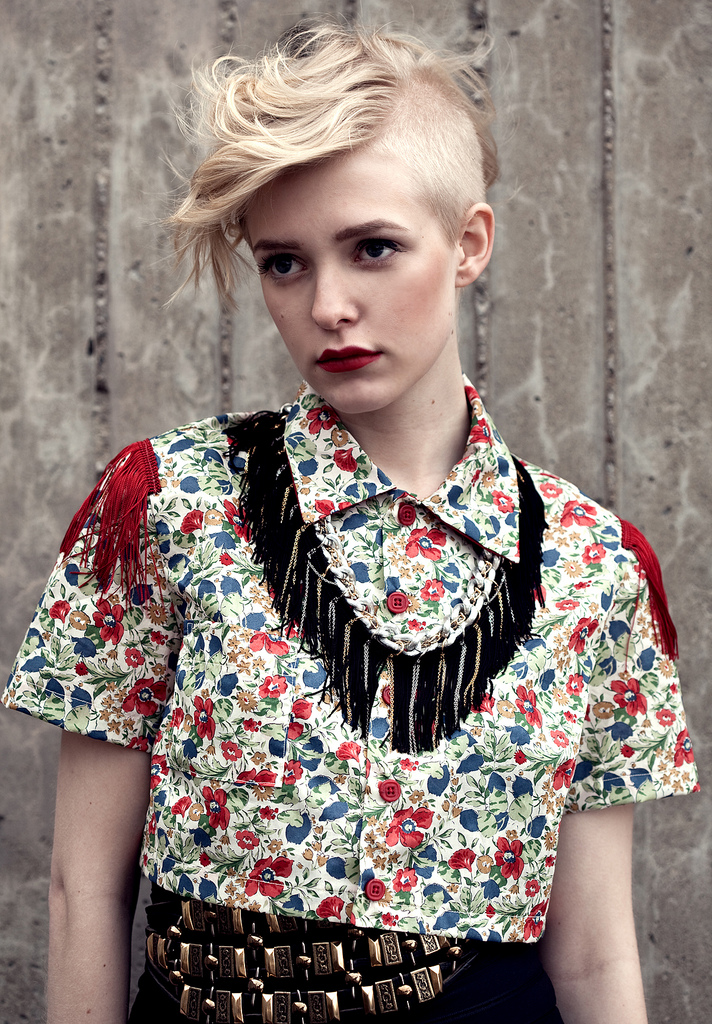 Norwegian Wood SS10
Most of the time what happens is that a bunch of random ideas start flowing together and making sense for a particular character that’s developing in my mind. I guess like an imaginary muse. For the spring collection I was inspired by a group of local ladies from an old neighbourhood I used to live in. The area was a little rough, especially the main high street (where my apartment happened to be). It was very grey, run down, lots of concrete, few trees. But there were these ladies who would get all done up in traditional dress on Sundays to go to church. I was always mesmerized by the bright graphic patterns of their outfits, contrasted against the ugly grey background of our area. They were so happy and excited to see all their friends and although I’m not a religious person, I could see that their religion and church was VERY important to them. It immediately would put me in a good mood, and I never forgot that. So that was the main inspiration for my spring collection. 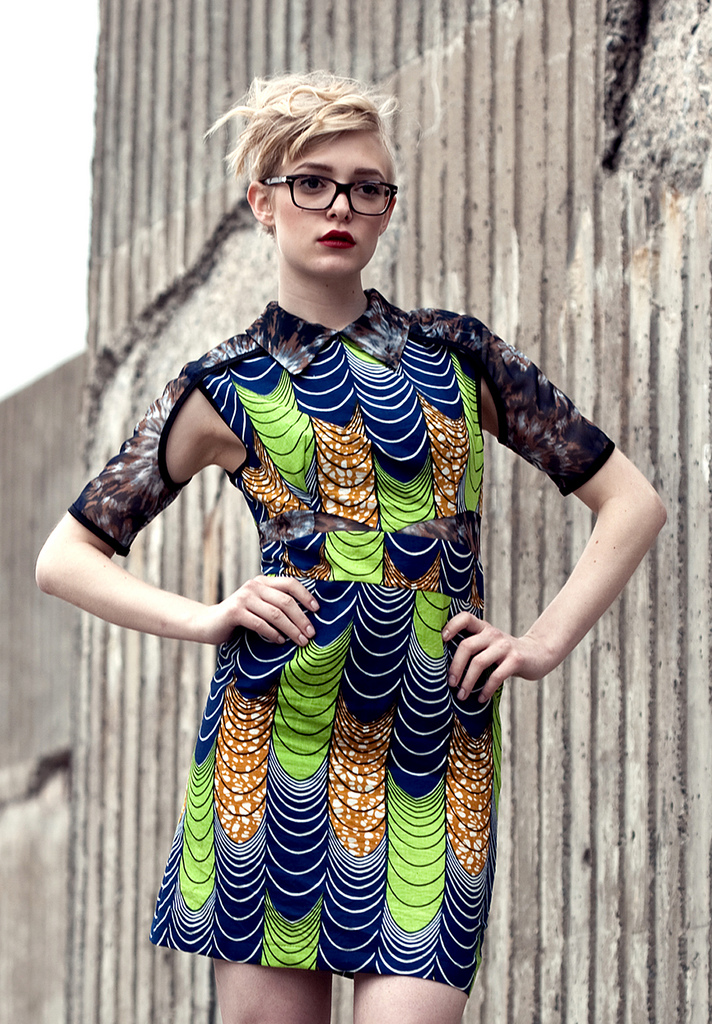 Norwegian Wood SS10
Favourite outfit?
This is not something that I wear every day, but I’m very partial to dresses. I feel best when I’m wearing a dress of any kind. My personal style is a bit schizophrenic and I end up looking very different every day, but in general, dresses are a favorite.
Top 5 designers?
Phew, this is hard! Phoebe Philo, Stella McCartney, Rodarte (they count as one, right?!), Christopher Kane… also need to throw in Jeremy Laing, Clayton Evans (Complex Geometries), Renata Morales and Mark Fast, Canadian favorites! 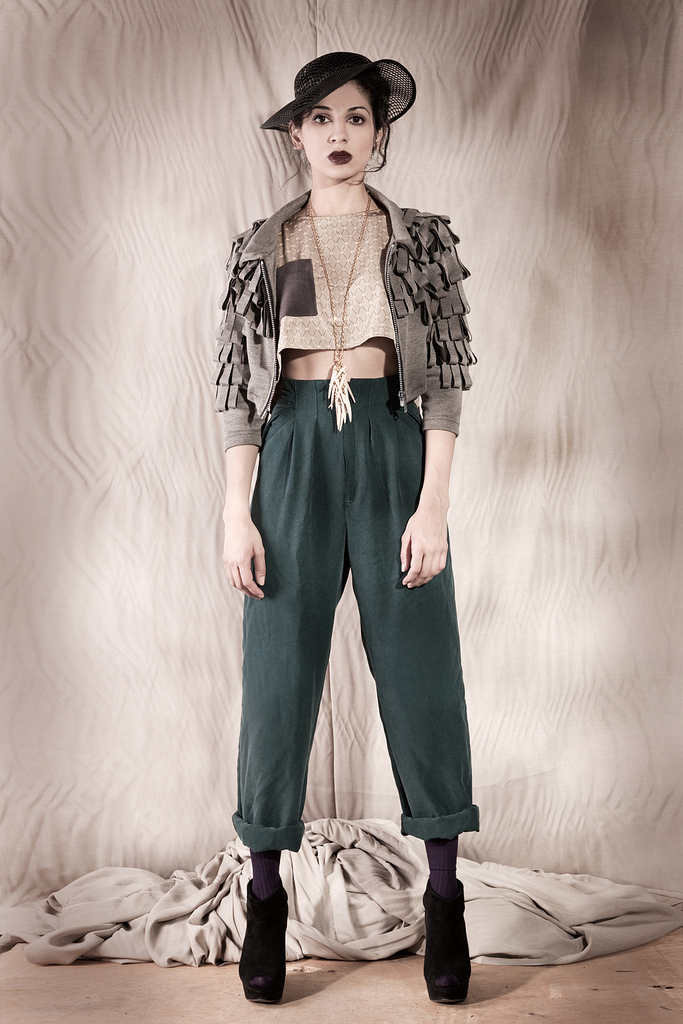 – The Builders and the Butchers

This may seem really random, because it is! I like sooooo much music, both new and old. It’s almost impossible for me to narrow it down!
Favourite city?
London, Stockholm, Hong Kong, they are my ultimate three, I can’t choose a favorite! 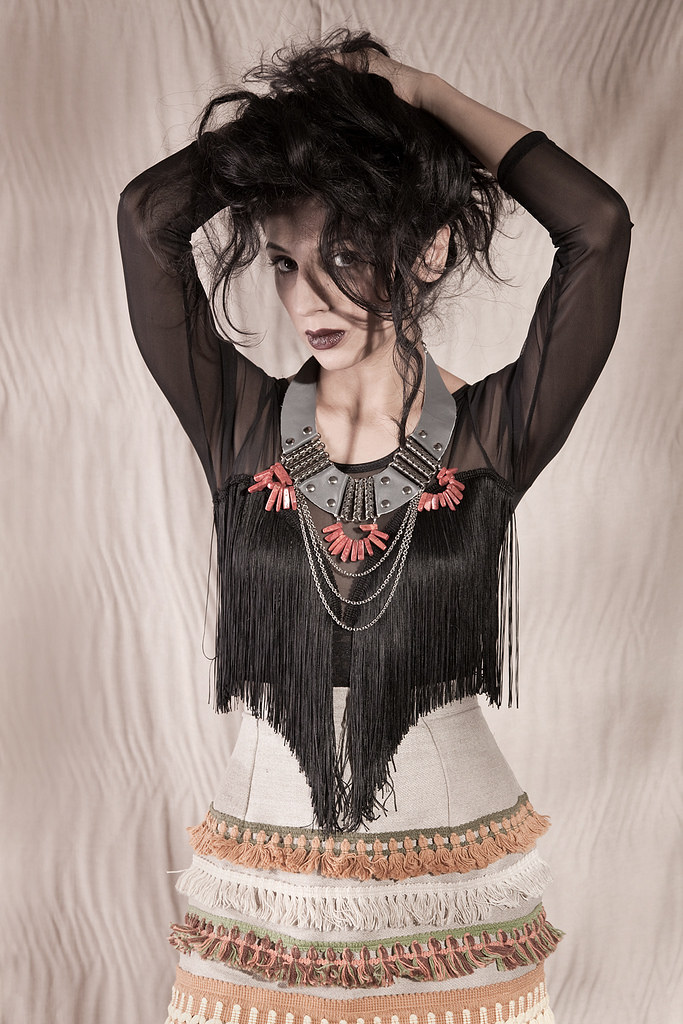 Norwegian Wood AW10
What were you like as a little girl?
Apparently I was both very bad (at home with mom and dad, temper tantrums, holding my breath until I passed out etc) and very disciplined (at school, good grades…), quite shy (used to get my baby sis to ask for extra condiments at fast food restaurants, I was too scared to go up alone – this ended around age 11) and always doing creative/crafty things in one way or another. My mom just told me a story about how one day I was drawing at the kitchen table when I was about 3 and said “I’m going to draw a chair!”. My mom and dad were like “OK cool, draw a chair”. So they started watching me draw it and they started getting worried. My mom said she actually thought I might be mentally challenged at this point. Apparently what I had started drawing looked NOTHING like a chair. Until she realized I was drawing an actual chair in the room, not an imaginary chair. She kneeled down and looked at the chair from my perspective, and she realized I was drawing the chair exactly as I was seeing it… in perspective. Which I guess is not normal for a 3 year old (she’s a teacher, she would know better than me I guess!). I think I was probably a very confusing first child for my parents.