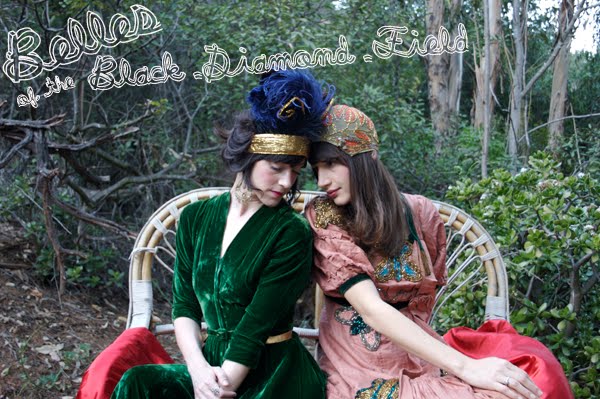 Maximilla Lukacs & SARAH-SOPHIE FLICKER are friends. They are also the two beautiful talents behind cinematographic & artistic duo The Belles of Black Diamond Field. They base their filming on the Vulnerability Manifesto, that promotes an empowered femininity and softness. Their eerie & whimsical universe never fails to inspire and motivate me to create more, write more and have a universe I can call my own.

Just having coffee, listening to Kurt Vile(the young crazy one not to be confused with the German composer Kurt Weill)…it’s overcast. I am pleased.

CRAZY! INSPIRING! I’M HEAVING IN REHEARSALS FOR THE NEW CITIZENS BAND SHOW CALLED “THE DEBT RATTLE” SO….I HAD BALLET CLASS THIS MORNING, PUTTING COSTUMES TOGETHER RIGHT NOW, TRAPEZE REHEARSAL IN AN HOUR AND CHOREOGRAPHY REHEARSAL THIS EVENING… I ALSO DANCED WITH MY DAUGHTER ON TIP TOE THIS MORNING, THAT WAS THE HIGHLIGHT OF IT ALL SO FAR!

I am really inspired by the ocean right now. I realize that I have directed my last two films in a bathing suit and that is not a coincidence. I love water. I love how scary and beautiful the ocean is… The abyss… The subconscious.  I am also super into the marriage of dance and film. Dancers are so incredible! Also super inspired by science and M theory and the notion of parallel universes!

ALMOST ANYTHING AND EVERYTHING IS INSPIRING ON SOME LEVEL… IT’S A HARD QUESTION TO ANSWER. OLD FILMS, MY DAUGHTER, DANCE, THE LIGHT AT MAGIC HOUR, AN OLD SONG, MAXIMILLA AND I ALSO TEND TO GRAVITATE TOWARD THE SAME INFLUENCES… BOOKS, POEMS… WHAT ISN’T INSPIRING? I LIKE THAT KURT VONNEGUT QUOTE.: “EVERY TIME SOMETHING STRIKES YOU AS BEAUTIFUL.. TAKE A MOMENT AND SAY “IF THIS ISN’T NICE, I DON’T KNOW WHAT IS!“ 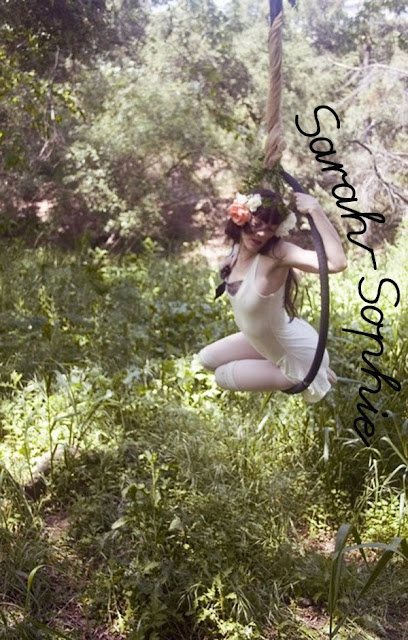 I originally wanted to be a painter… I was in art school and I took a film class and realized that I could make moving paintings! That really opened a whole new universe for me. So I taught myself how to use film cameras and learned how to edit and I started making weird little art films. When I met Sarah we decided to join forces and put our magic powers together. I think that we are fairly psychic with each other at this point and as we are doing research for films I start to see the vision of where we are going and then it’s just a matter of finding a way to translate what we are seeing in our heads into something that we can share with the world. Films are magic, and they can put magic spells on people. So being a film maker is kind of like being a magician.
I’VE ALWAYS BEEN IN DANCE AND THEATER. I WAS ACTING FOR AWHILE IN MY EARLY TWENTIES AND REALIZED THAT I WANTED TO BE MAKING WHAT WAS IN MY HEAD! THEN MAXIMILLA AND I FOUND EACH OTHER AND IT WAS FIREWORKS FROM THERE ON…

We met when we were ready to teach each other a lot of stuff.  And we both grew so much I think from working together. I love Sarah! She is amazing! I remember when we were shooting our first film “Kill Your Darling” and I was trying to get this cheap video camera to look like silent films and with Vaseline on the lens and paper vignettes we somehow got there and she said “You can make things look the way I see them in my head”. So that is why we work together.
Kill Your Darlings

The Belles of the Black Diamond Field | MySpace Video

MAXIMILLA AND I RAN IN THE SAME CIRCLES IN CALIFORNIA FOR YEARS BUT IT TOOK US BOTH MOVING TO NEW YORK IN 2001 TO BEGIN A REAL FRIENDSHIP AND WORKING COLLABORATION. WE BUMPED INTO EACH OTHER ON THE LOWER EAST SIDE AND REALIZED THAT WE WANTED TO/NEEDED TO/HAD TO WORK TOGETHER!

My mother worked at a costume shop when I was growing up in Budapest, Hungary. So I grew up with a magical closet full of fanciful costumes that I would always put on and force my brother to put on as well and we would just PLAY! I loved it and I would invent elaborate characters and I always found that the clothes would take you to these amazing places in your head. So not much has changed. I think clothes and costumes are super inspiring so as far as fashion I tend to gravitate towards designers that create entire new worlds to play in like Alexander McQueen (Plato’s Atlantis! Amazing!!) or Rodarte.  Their clothes just make your imagination soar! 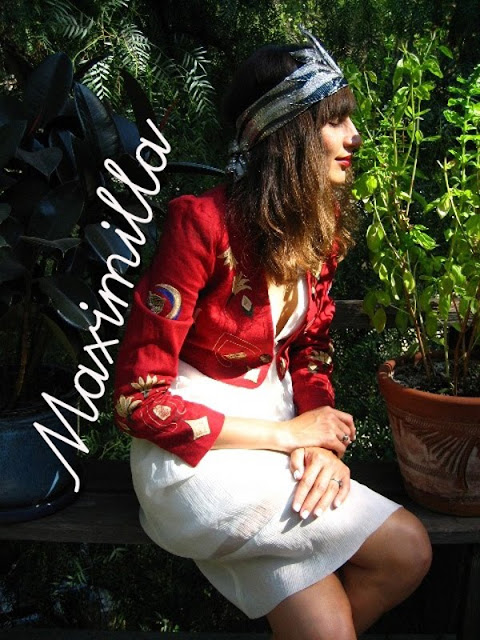 WHEN I AM WORKING ON A FILM OR A CITIZENS BAND SHOW FASHION INFORMS A LOT OF IT. IT CAN DICTATE A STORY, FLESH OUT A CHARACTER, SET A MOOD. FASHION ALSO IS AN INTERESTING BAROMETER OF WHERE WE ARE AT POLITICALLY AND CULTURALLY. THE 20’S, FOR INSTANCE, WAS A VERY FREE AND DECADENT TIME AND THE FASHION REFLECTED IT IN LOOSE, SHORT, HEAVILY EMBELLISHED DRESSES. WHEN THE STOCK MARKET TANKED IN ’29, SO DID HEMLINES… THEY WENT WAY WAY DOWN AND NECKLINES WENT UP! IT’S ALL CONNECTED!

I really LOVE to mix things together that are NOT supposed to go together. I have always had my own style which is a lot of times considered pretty “illegal” by fashion standards… Someone recently described my style as “Masonic Flapper”. I grew up in a DIY underground culture so fundamentally I love things that people create themselves. But I like to mix that with fancy bits. I love beautifully hand crafted vintage stuff as well.

An Astronaut or a Pilot. Something that involved flying… I also really liked to draw on the walls…
BALLERINA, ACTRESS, CIRCUS PERFORMER….

This is kind of silly but I am terrified of vacuum cleaners!

When we started shooting our last film “Spell” right when we set up for the very first shot I was looking at the monitor and then looked at Sarah and I started crying. It takes so much work to get to that moment and Sarah and I had not made a film in years. So that was pretty beautiful! It’s pretty incredible to dream beautiful dreams and then get to make them come true.
Clearly watching Sarah’s baby being born is way up there as well. LIFE changing experience!!

“Spell” from Maximilla Lukacs on Vimeo.

THE DAY MY DAUGHTER WAS BORN! MAXIMILLA AND MY HUSBAND WERE THE ONLY OTHER FAMILY IN THE ROOM. IT WAS FAR AND AWAY THE MOST POWERFUL, ENDURING, PROFOUND, DAY OF MY LIFE! I HAVE NEVER FELT LOVE WASH OVER ME LIKE THAT BEFORE!