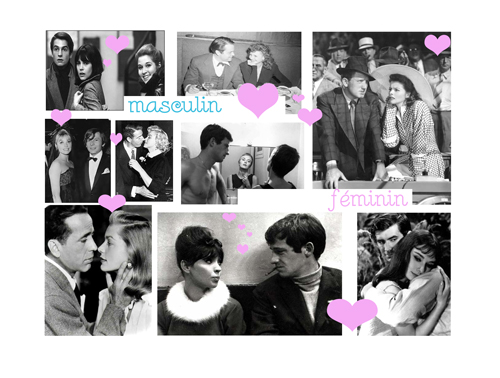 Maria Rose & Eric (E.K.) Wimmer are two lovebirds currently living in Denver. You might have been on their planet before… Between them, they explore many art forms, including writing, painting, music and more! They also happen to both be extremely lovely, which is why I thought they would be perfect to start the new Masculin/Féminin feature on Mademoiselle Robot.

The idea is for a couple to explore the style differences between men’s & women’s vision of style. Read on, and it will become very clear… 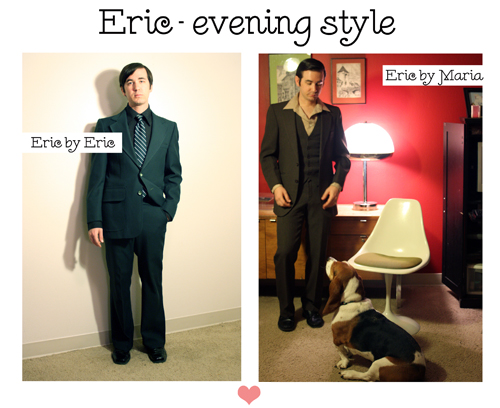 Eric on his evening look

I love this vintage Brookford suit. Brookford killed in the seventies with disco 3-pieces! I’m missing the vest, but I matched this with a pin-striped black shirt and striped green tie. The tie is a slightly lighter hue which I like. A man should never underestimate his tie. Speaking of which, when a man wears a solid suit he should compliment it with some stripes or something, that’s the oldest trick in the book.

For E.K’s evening outfit I decided to go for a Serge Gainsbourg meets Nick Cave style. I had him slick his hair back just to put the look over the edge. The suit is a brown pinstripe three piece number, another vintage find. I really love when a man wears a three piece with a high vest. E.K. pulls this look off because it has classic elements with a little modernity mixed in. The lighter brown shirt is a Christian Dior; the color works with the suit, rather than contrasting. I left out a tie and opted for a less constricting look. 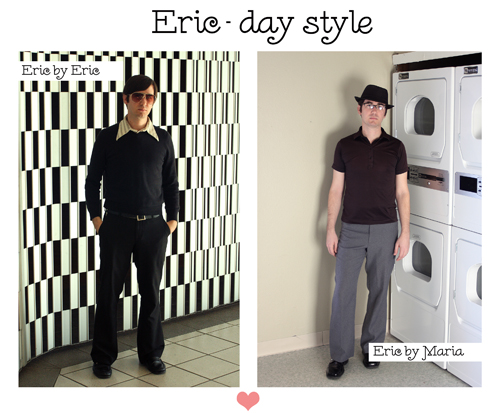 Eric on his daytime look

About 8 years ago I was invited to hang out with this band I liked. The door was locked so this guy let me in. I went upstairs and he introduced me to the band like this, “Hey this indie kid was hanging around outside.” When I heard the word “indie” I about lost it. I vowed right then and there to not be that guy who only wears Converse, band shirts, jeans and crazy thick-rimmed glasses. It was a gradual transition and at times I struggled (especially with my Cure, Siouxsie and Bjork shirts). Now I only dress with nice sweaters, suits, ties and nicely cut pants. In the look I’m wearing here I make the distinction between business/business and business/casual with a nice seventies vintage fly-collar dress shirt. The print adds a little something to the plain black sweater. The shades just add that I’m an artist/musician (these are similar to my grandfather’s sunglasses from the sixties which I wore constantly. Someone stole them from me when I was in the Caribbean last year).

I chose this particular outfit for E.K. because I wanted something that was casual, but not lazy. I chose a simple black short sleeved shirt and paired it with vintage gray slacks. The short sleeved shirt has a few buttons and a collar instead of a t-shirt which would have been too relaxed. E.K. is brilliant and I wanted him to have a bit of a scholarly look so I had him wear his glasses. The frames have a sort of fifties flair which goes well with the outfit. Finally I completed the look with a nice black hat. E.K. has the ability to really wear a hat, instead of having the hat wear him. The overall look leaves it pretty open to a casual lunch, an afternoon walk or even a more formal lunch meeting. The outfit isn’t over styled and makes E.K. look as though he cares about how he looks, but not too much. 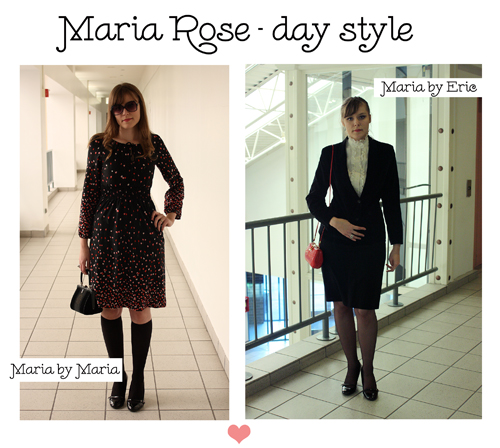 I found this handmade dress at a thrift store and fell in love. The fabric is pink and red tulips on a black background. The cut of the dress suits my body type, which I think is the first rule of choosing any outfit. I chose to pair the dress with black knee high socks to keep the look fun and light. I chose shiny black heels to add a little height. I wore my hair down and lightly curled to keep the general impression inviting and cheerful. The glasses I found at a thrift store as well as the velvet purse. Overall I wanted the look to be engaging. I chose shiny black heels to add a little height since the line of the outfit is broken.

I chose this look for Maria because she can pull it off. She’s 5’11” so she can get away with a really striking outfit. The black and white color combination draws immediate attention to her and the red purse adds a touch of color without disrupting the overall look. I think the whole Victorian look is really popular right now, which makes me most want to avoid this style. The key is avoiding the Victorian/Goth look. I put Maria’s hair up to accentuate the beautiful collar on this vintage shirt, but also to lighten up the look. If she had a black Mod bob with a fringe she’d look like she was in Ipso Facto (don‘t get me wrong, those girls are beautiful), but her blonde hair gives her less of a musician look and more of a artist/model/writer look. It gives her a noticeably unique twist on an all-too-common style. 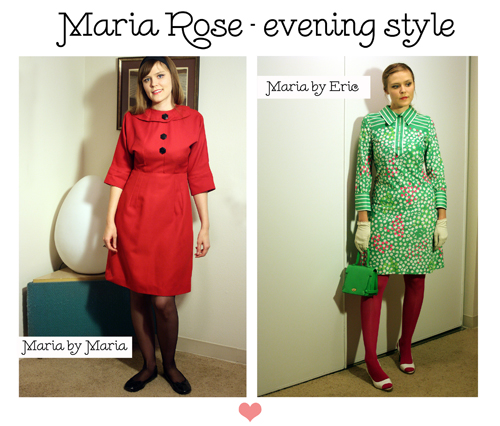 For my evening outfit I chose this bright red dress, another handmade vintage find. The large buttons and busy top make much accessorizing unnecessary. I put a black scarf in my hair to keep my hair down, but out of the way. I decided on simple black ballet flats because I am tall and when I go out with a group of friends I tend to slouch if I wear heels. I kept my make-up simple just some eyeliner and red lipstick, because the dress is bold enough.

I love this outfit. A girl has to have some self-confidence to pull off bright colors at night. I see it like this, Maria is so stunning she attracts attention wherever she goes so why not roll with that. The tights go well with the pink in the dress and the green purse is a great touch. The white gloves are a personal fixation of mine. I really love the look of gloves on a woman and these bad boys are from the twenties (we picked them up at an antique store) so it’s a great juxtaposition to the seventies dress.

If like me you fell in love with the Wimmers, you can check out Maria’s blog, Little Things are Big and Eric’s blog, The Humming Wires.

For the hardcore fans, they are currently working on a book, with collages by E.K. illustrating short stories by Maria Rose.
She is also writing a vegan cookbook (nom nom nom).

Eric is working on his music, with a full lenght album in the works for Maps & Mapping and a solo E.P. “The Invisible Audience”.