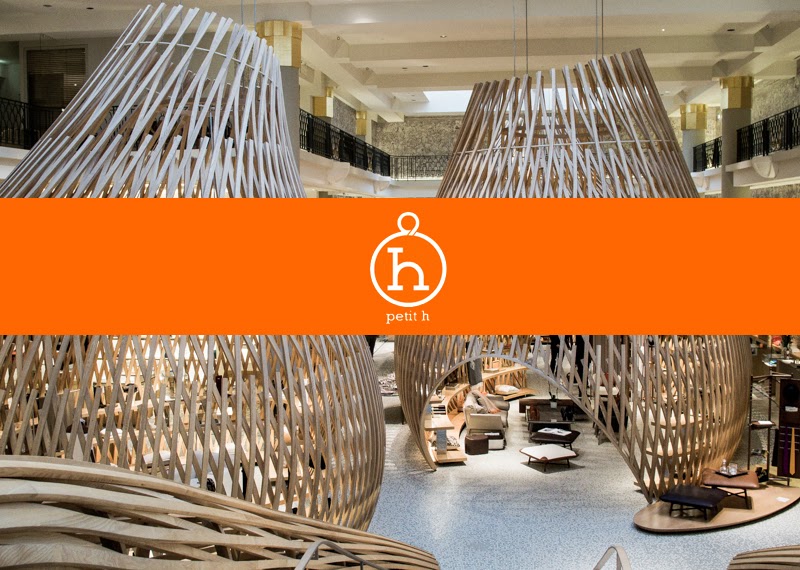 The story of Hermès is a beautiful family tale, filled with passion, innovation and generation after generation of the most unique and luxurious craftsmanship. Today, upon hearing the name “Hermès“, most people will think of lovingly crafted handbags named after iconic women. Kelly and Birkin are both highly sought after handbags and household names. Others will think of the covetable carrés, these silk scarves worn by chic ladies the world over. To me, Hermès reminds me of my grandparents. It reminds me of the tales my grandmother used to tell me when I was little, tales of her short stint working in the Faubourg Saint-Honoré store in Paris in the sixties. It reminds me of my grandfather, who wore the Eau d’Orange Verte fragrance most religiously throughout his life. It also makes me think of the hours I spent playing with my mother’s carrés as a teenager, hoping one day to become as elegant as her – to this day, it still hasn’t happened, but I still enjoy trying her scarves on.
On Monday, I boarded the train to Paris, ready to create my own Hermès tales. Mine would be tales of treasure hunting, curiosity cabinets and little girl dreams. Mine would be born in the Petit h atelier, while listening to Pascale Mussard’s incredible life story. Mussard is the great-great-great-granddaughter of Thierry Hermès and has been immersed in the brand since she was a little girl collecting scraps of leather in the atelier on her way home from school. Her life is punctuated by events that seem to have been conspiring to put her right where she is now, at the head and heart of Petit h, Hermès’ artistic upcycling arm. When Pascale was a little girl, her mother would make her outfits for costume parties, and while all her friends wore princess dresses, she went as Peau d’Ane, with an intricate donkey skin made out of leather scraps. One of the Hermès artisans crafted  Ken and Barbie dolls for her out of leather – she affectionately refers to them now as being “a little bit chubby“. Meanwhile, she was building the most extravagant collection of treasures. Ribbons, scraps of silk and leather, belt buckles – anything she could find, she would keep in a special box. Nowadays, her precious collection has evolved to become the Conservatoire des Créations Hermès which is a living history of the House.
It wasn’t enough for Pascale Mussard whose thirst for (re)creation and re-invention seems almost as endless as her youthful enthusiasm. In 2009, she had the idea to reclaim, review and re-create objects using discarded materials from the Hermès workshops. In the House’s quest for perfection – the ultimate luxury – she realised a lot of precious materials were wasted. The tiniest defect makes a bag, scarf, vase or any other Hermès item unsuitable for retail. This is how the Petit h métier came about: from the idea of re-purposing these materials by ridding them of their flaws and marrying them with other flawed / de-flawed items to create brand new objects. The sole constraint is that all objects must have a purpose.
“I invite designers and artists into the Petit h workshops that we call our Ali baba cavern, where all the different materials rejected by Hermès are gathered like acorns. These collaborators have free rein to explore and create. Rebirth and up-cycling is the underlying approach – I love to re-create, re-invent and re- enchant.” Pascale Mussard
Four years on, Petit h is going strong and has its own dedicated space in the Rue de Sèvres store in Paris, and will be setting up camp in Hermès Bond street in London from November 20th until December 7th. The scenography of the exhibition was born from the combined imaginations of Pascale Mussard and Faye Toogood and it will serve as a beautiful backdrop to the formidable Petit h pieces. All objects will be available to purchase, which is a great opportunity to start your very own Hermès adventure, as smaller items such as silk bracelets or coffee cup holders (a personal favourite) are all fairly accessible. 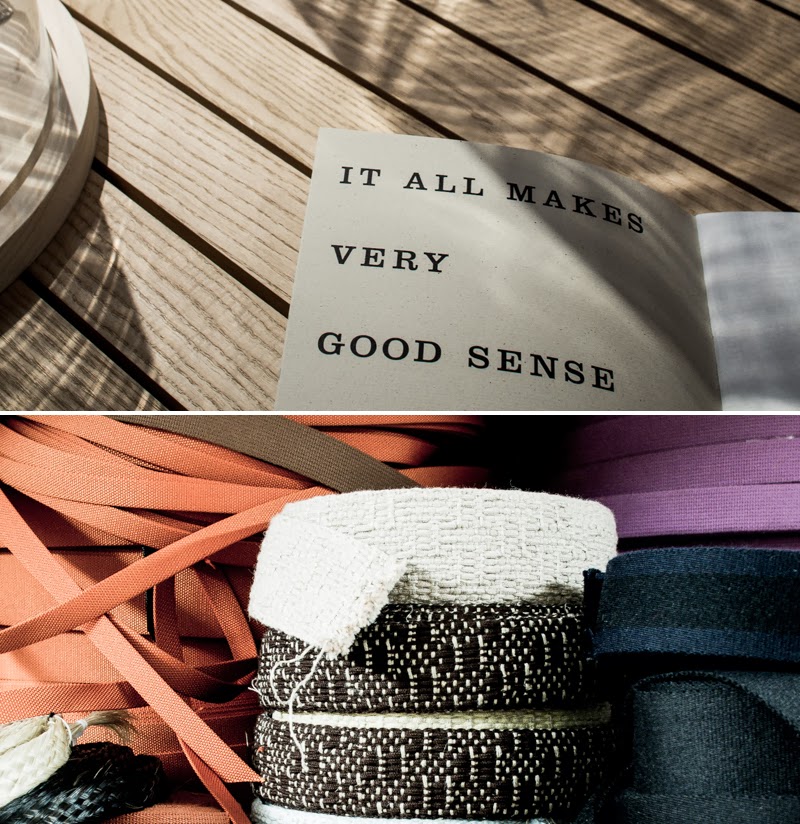 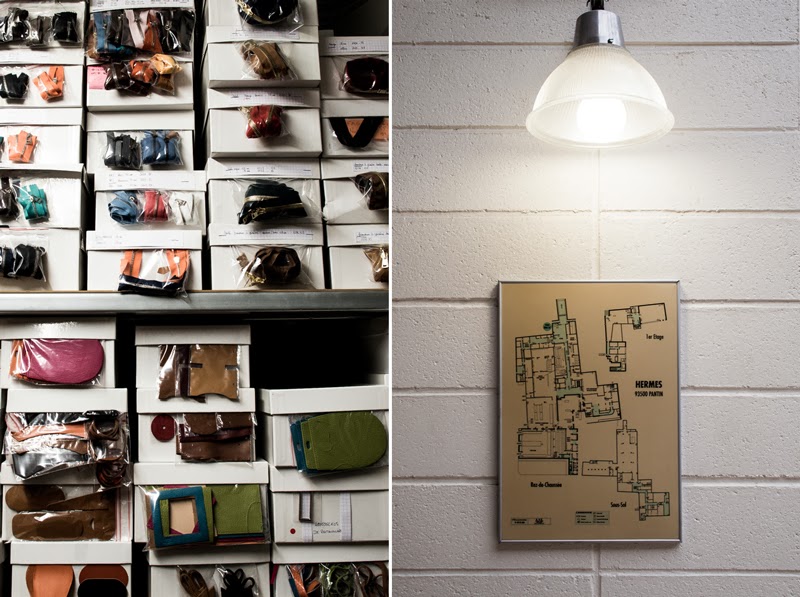 Hermès ribbons, buttons, zippers and buckles are all stored in the mercerie of the Petit h atelier, ready for designers to seek inspiration… and use. 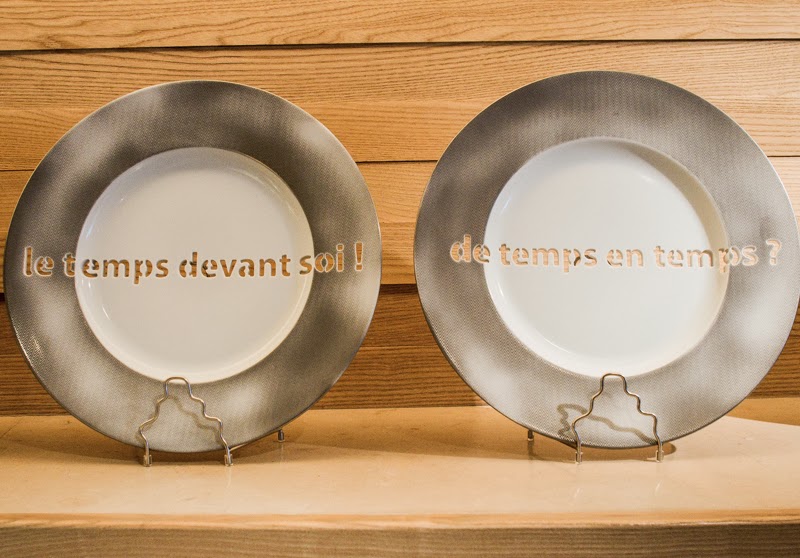 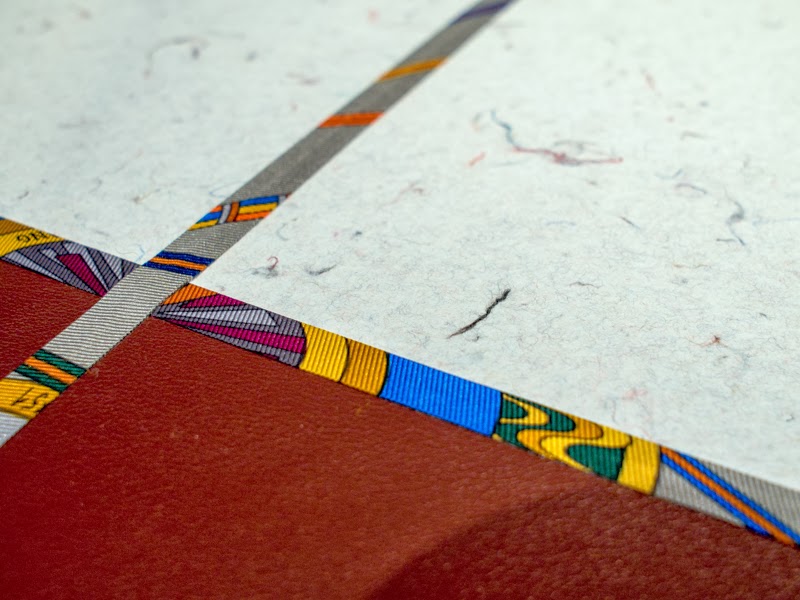 Petit h makes designers think outside the box, they have to constantly innovate and come up with new techniques to create their pieces. The Petit h métier is ever evolving. 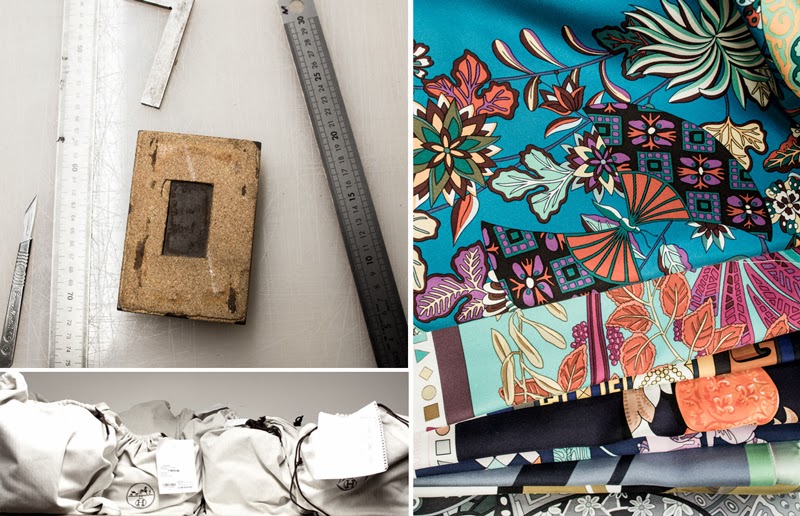 Tools, materials and imperfect bags are combined to create something entirely new. 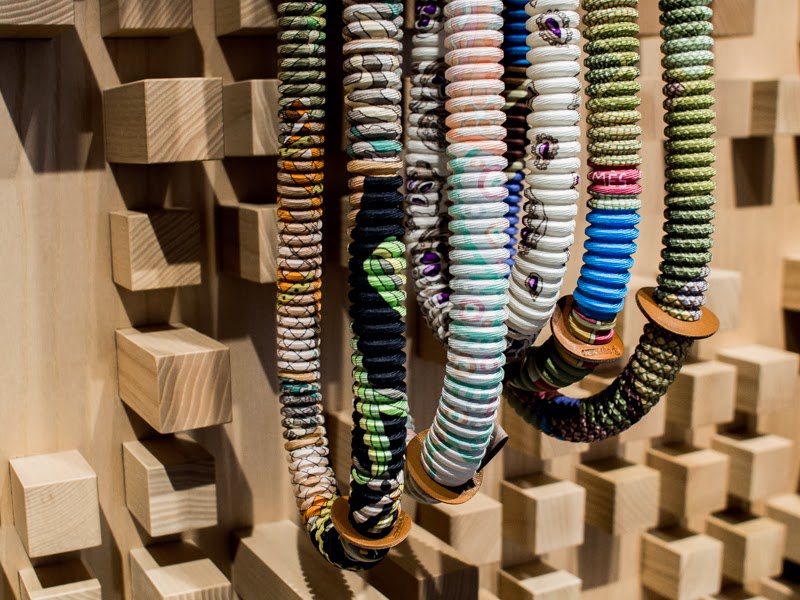 Necklaces made from silk scarves and pieces of leather. 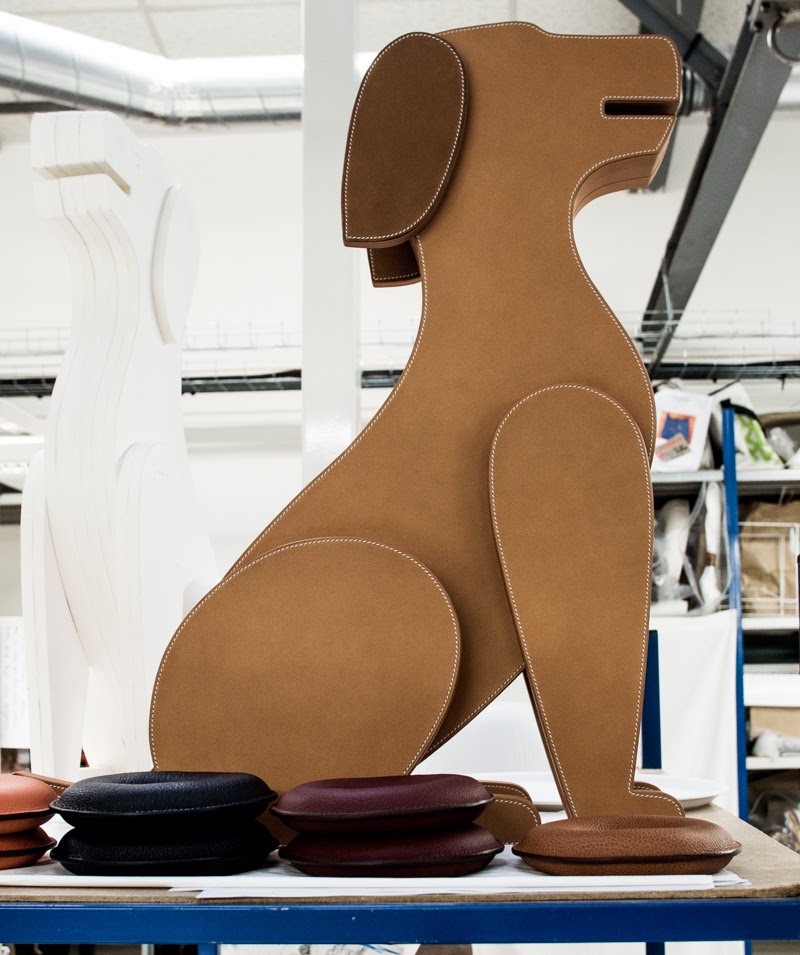 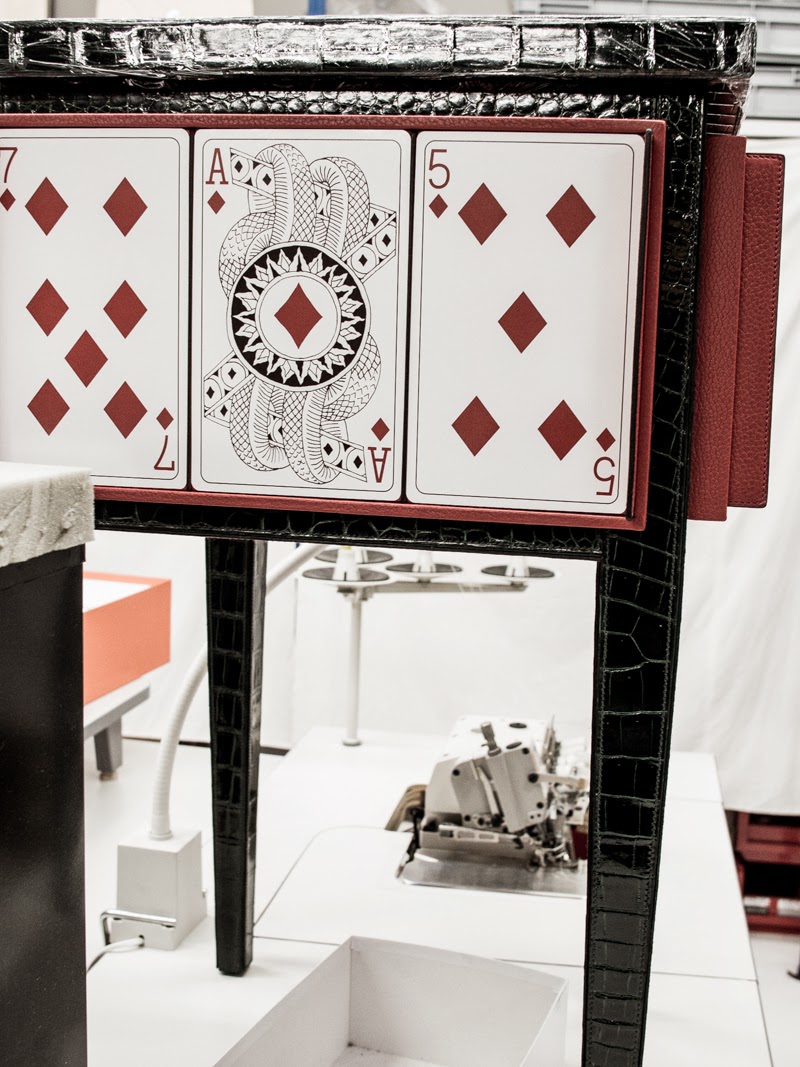 A table made from exotic skins and giant playing cards 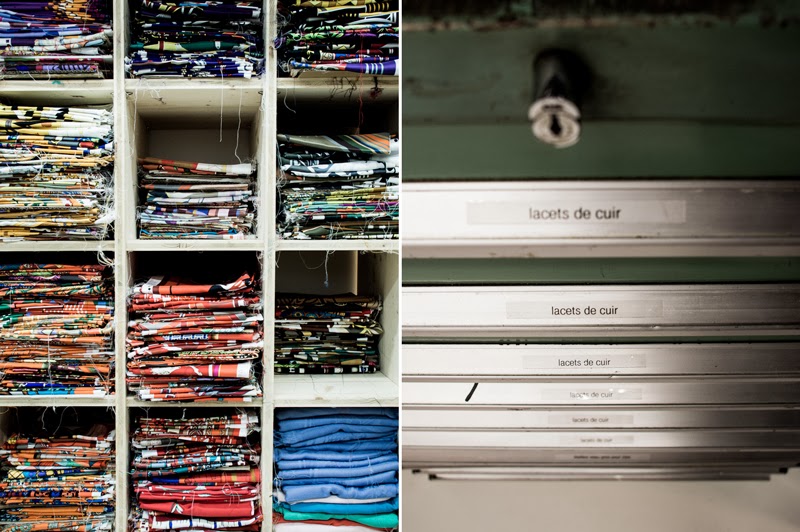 We met with Pascale in the most spectacular room, filled with silk scarves from wall to wall 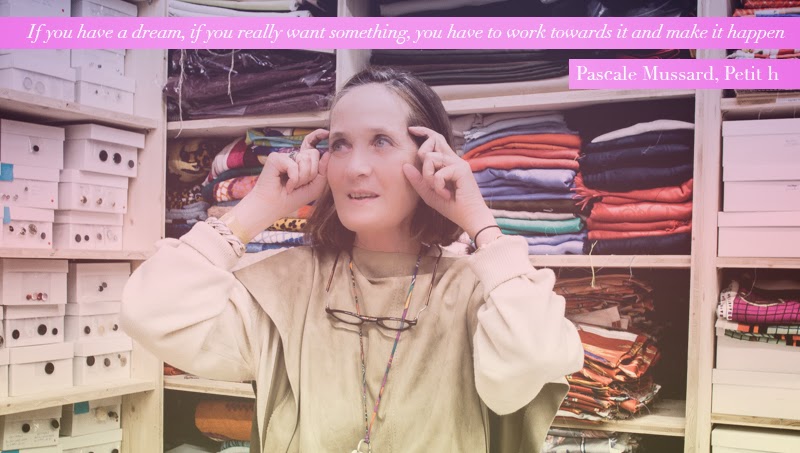 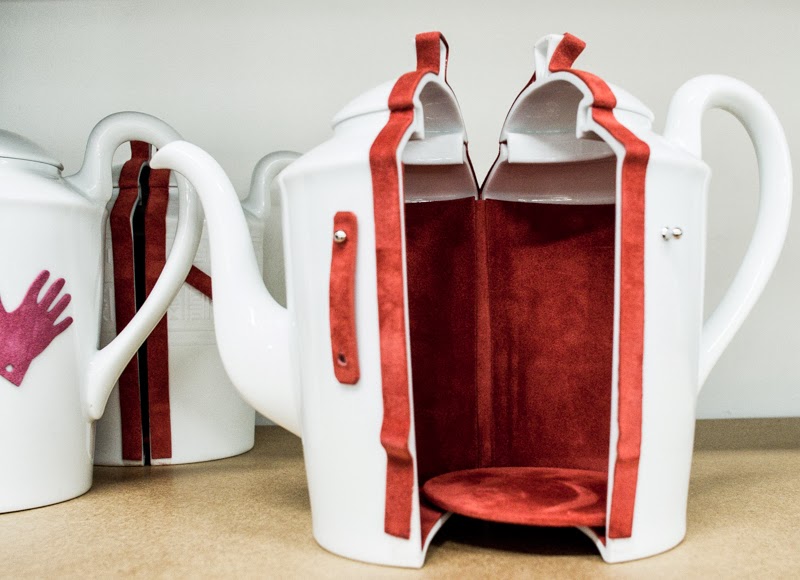 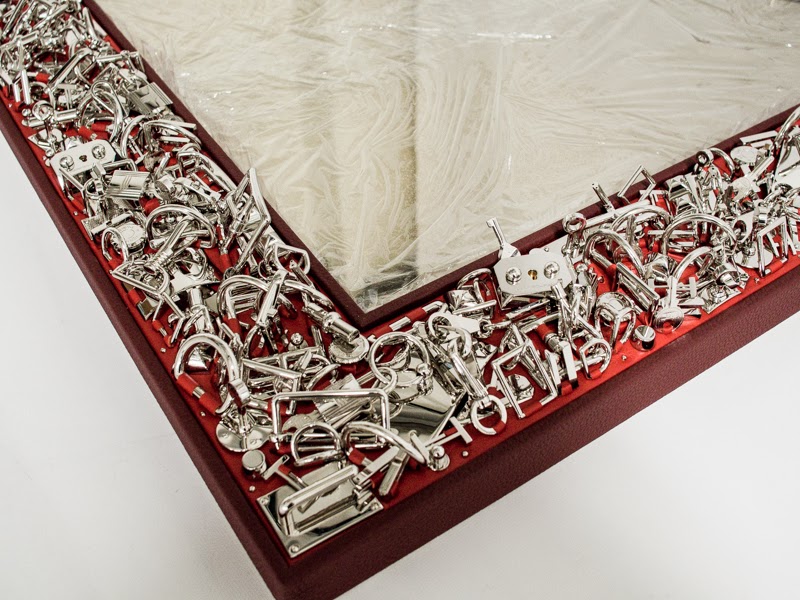 A mirror decorated with discarded locks and fastenings. 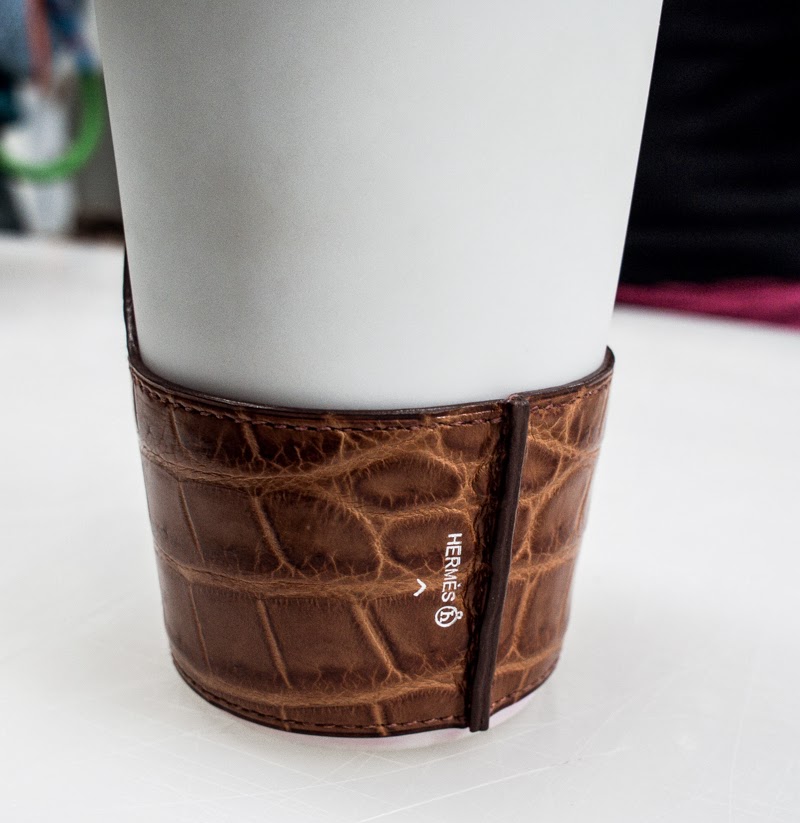 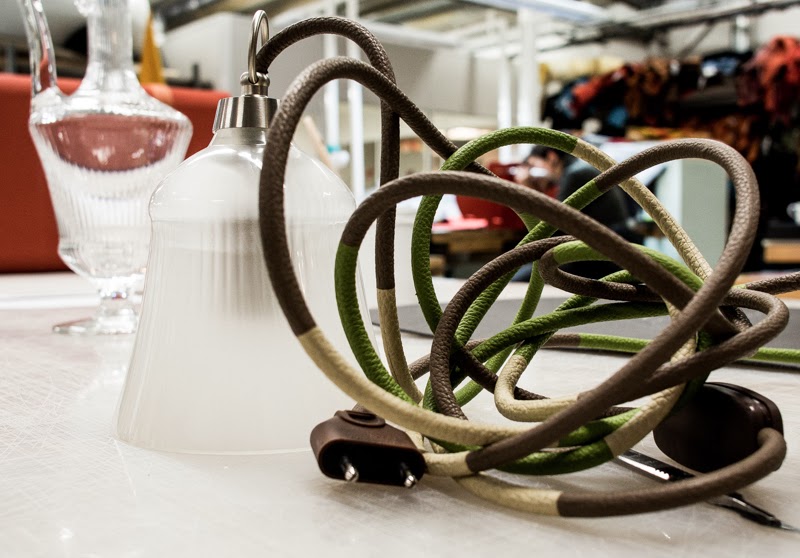 A hanging lamp made from a Saint Louis crystal vase and upcycled leather. 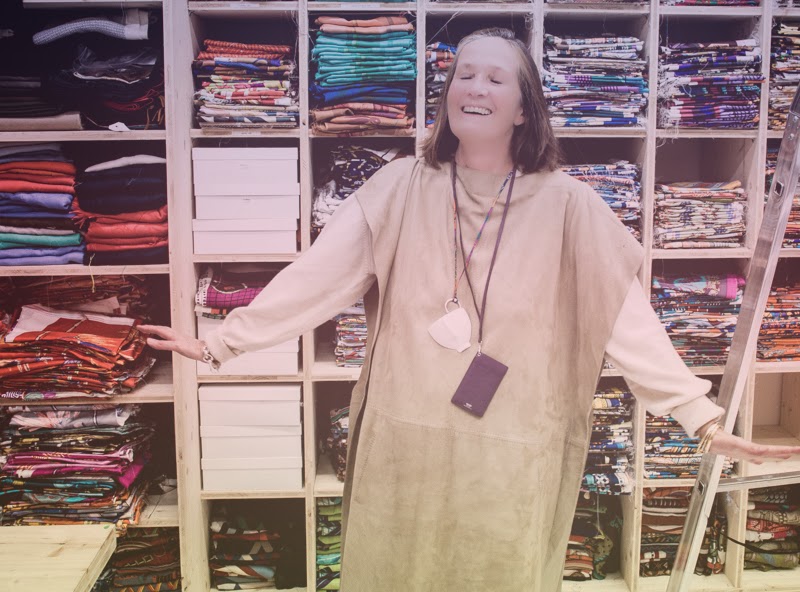 Pascale Mussard in her treasure cave! Her enthusiasm so contagious we left with enough inspiration to last us a lifetime.