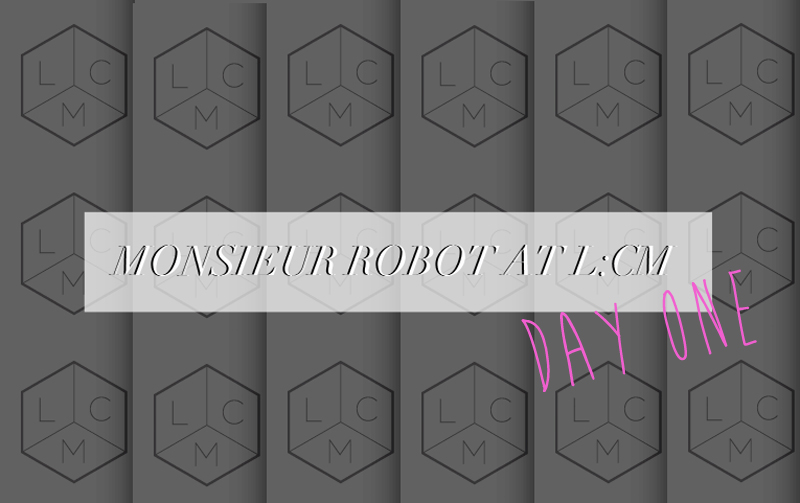 LC:M wrapped up just a few days ago and to be brutally honest I was largely underwhelmed by what I saw. I’ve decided to dispense with sycophancy as you can read that kind of ‘journalism‘ on other sites and in magazines. You know I’m not a big fan of SS collections generally – menswear is so limited compared to womenswear, but never more so than when it comes to hot weather. There’s only so much you can do with shorts and vests right? I’ve decided to cover LC:M over three posts taking it day by day – this way you’ll be able to experience it like I did – and see the trends unfold for yourself. I’ll take my favourite collections and cover those separately and in a bit more depth in the next few weeks so stay tuned.

Day 1 began for me with Kay Kwok, I wasn’t entirely sure what to expect. Kwok is from Hong Kong although he studied menswear in London and interned at McQueen, the impact of which is palpable in his designs. It’s one of the collections that grew on me over the course of the next few days, once I’d been able to contextualise it along with all the other designers offerings. I would say that the somewhat Edwardian hair was a little confusing in conjunction with an aesthetic that pushes the boundary of what could be considered ‘futuristic’; but that was a problem with styling. The collection was inspired by “the electric current carried by charged particles trapped in a planet’s magnetosphere” and really, that’s good enough for me. Check out the totally bonkers shoes too. 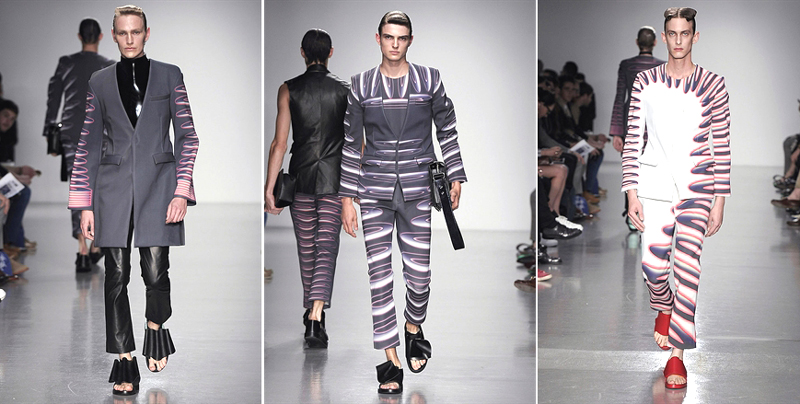 Next up was Topman Design – always a highlight. This collection is called “Techno Cowboy” which sounds like a 70’s B-Movie to me, like a straight to VHS rip off of Westworld. I’m not really sure where this collection came from, Gordon Richardson’s inspirations are always deeply idiosyncratic and in a way that’s one of his stengths. Wide legged trousers are certainly a trend but I didn’t see cowboy shirts anywhere else. Mind you I happen to look awesome in a cowboy shirt and in wide legged trousers so it’s all good… 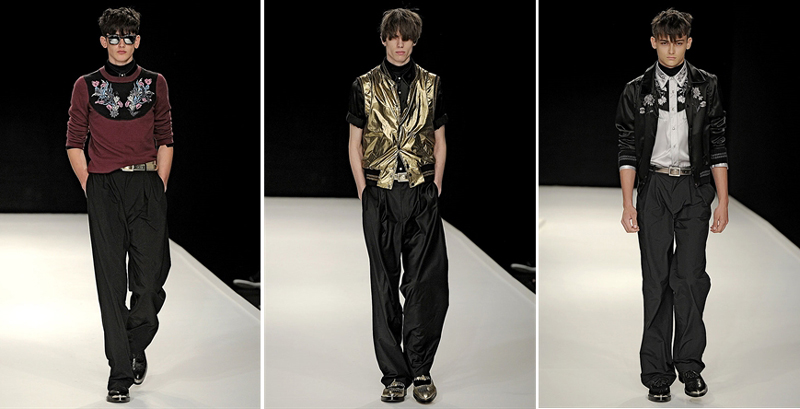 The next big show was Astrid Andersen – who I’ve been obsessed with for ages now. Obviously I’m a big fan of sportswear – but it can often look out of place on a runway. We’re so desensitised to thinking of this kind of clothing as anything other than functional – because it’s the most common style of clothing we see on a daily basis. Do you ever stop and ponder the cut or fabric of a pair of tracksuit bottoms when you see them on the street? No, chances are you barely notice them. Andersen imbues her sportswear with enough artistry to elevate it above mere streetwear and make it catwalk worthy.

There’s an element  of Andersen’s designs which seek to explore gender roles and gender performance through fashion. The subtle nuance of colour choices (pastels shades and nude tones) as well as the fabrics (sheer panels and stretch lace) should jar with the raw viscerality of her muscled and oiled male models. They weren’t wearing as much lipstick this season as they were last time – a detail which strikes me as knowingly ironic – Andersen is deliberately pushing the limit of what can be considered masculine. If you described to someone who hadn’t seen the show, that men were wearing lace and lipstick, they’d probably conjure up an image of a drag queen but Anderson manages to transcend the narrow gender roles defined by fashion. This juxtaposition of the male body with fabrics and cuts traditionally reserved for womenswear actually enhances the model’s masculinity and really that’s the key to Astrid Andersen’s aesthetic. 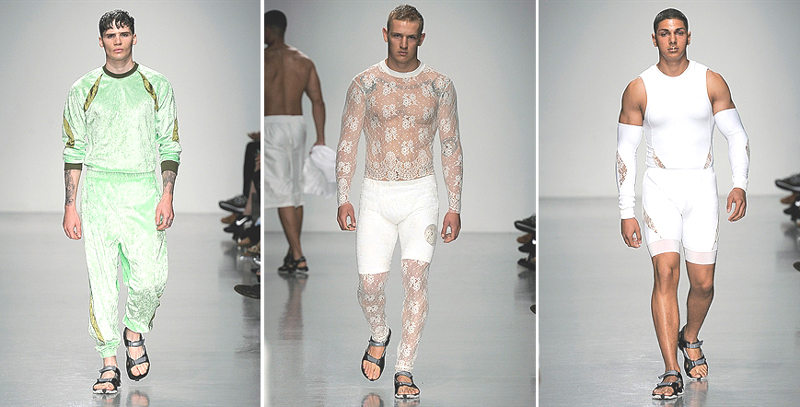 The MAN show is another highlight of the men’s collections for me and the star in this season’s line-up was unquestionably Bobby Abley. This collection explores youth culture – with a specific reference to hip-hop inspired streetwear trends. The kind of oversized clothing that typifies this look can often make the wearer look childlike and Abley is consciously playing on this dichotomy of what is intended to look ‘gangsta’ but can turn out looking like kids playing dress up. The teddy bear naturally becomes a motif appearing on t-shirts and well as on rucksacks (think the kind of plush Disney character rucksacks you see on pre-schoolers). Add to this some deliberately cartoonish stick on tattoos (I loved these as a kid) and plastic crowns (the kind you get when you hold your 10th birthday party at Burger King) and the result is a fascinating dissection of the man/boy hybrid. It’s a clever trick as it works on both a surface level as well as on a deeper sociocultural one. He’s playing on the pretense of machismo that these clothes purport to convey while revelling in how, ostensibly, you can also read this aesthetic as childlike. 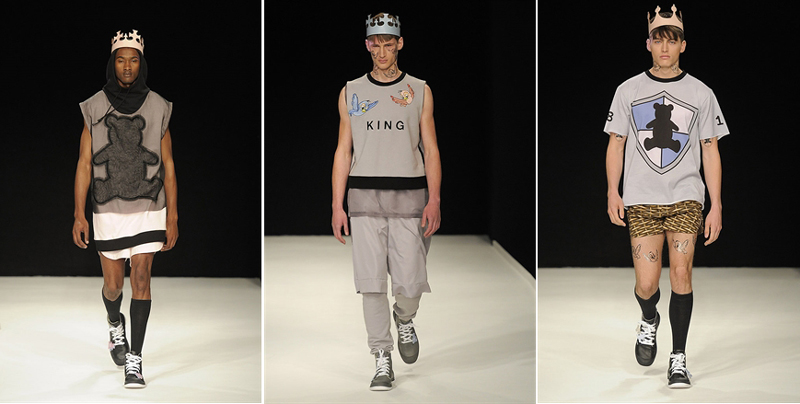 One of the last shows of the day was Agi & Sam – who are probably pretty pleased with their recent Topman collaboration, I saw one specific blazer from the collection on at least 5 different people on the first day of LC:M… awkward. They turned in a typically modern and colourful collection. I don’t use the word modern lightly as it’s criminally overused but like Raf Simons, Agi & Sam are always pushing their designs forward, never veering into self-referential territory or repetition. The short sleeved blazer layered over a long sleeved t-shirt was my favourite look from this collection. It seems to reference both our underwhelming Summer weather and the pairs wonderfully careless abandon with the supposed limitations of tailoring. 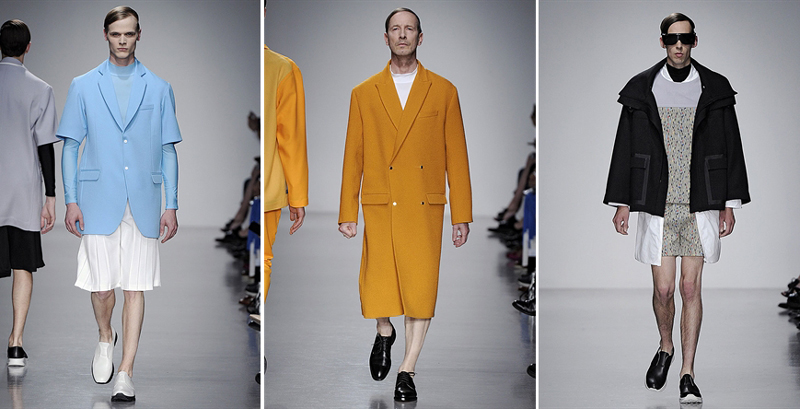 And that is how day 1 ended. I’m a little more impressed with what I saw now that I’ve had some time to think it all over but the stand out shows were definitely Astrid Andersen and Bobby Abley. Next week we’ll look at day 2.
Follow me @RobotMonsieur