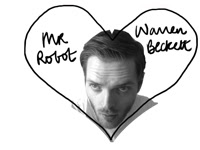 I don’t suppose there would be any point in me telling you how much I love dressing up, as that’s probably somewhat obvious by now. Throw in my crippling addiction to horror movies, fake blood, satanism, real blood and naughty teenage babysitters who are totally going to get themselves killed by an axe murderer and the party is just getting started. Halloween is the best excuse to dress up that you get all year so don’t waste it on cheap supermarket costumes and joke shop masks. There’s no reason why you should have to abandon all sense of fashion, even if you’re going to a fancy dress party… Which brings me to Daniel Palillo. Like the lovechild of Jeremy Scott and Anton LaVey, Palillo’s SS 12 collection is pure Halloween madness.

Fluffy pink rabbit ears don’t cut it, so how about zombie Bugs Bunny? No? Don’t like rabbits? What about a skull with a mohican? I don’t often find myself thinking “OMFG I need that tracksuit” but Daniel Palillo’s skeleton tracksuit is literally the greatest use of sweatshirt fabric I have ever seen…

Scary clowns? Check. Vampire rabbit? Check. A skull in a Marge Simpson wig? Check. It just keeps getting better right? These are the kind of clothes that make me want to turn every day into a fancy dress party.