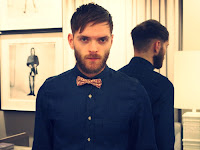 I have a long standing obsession with Leigh Bowery. Really he’s the great unsung performance artist of his generation, and of the generation that followed. The impact he had on art of all kinds, on fashion, even on culture as a whole is hard to quantify but one thing is undisputed, he always looked extraordinary. I have never really been able to pick a favourite look, mostly because they’re all equally wonderful, but one that always stuck in my head is one I call, lettuce head.

There were actually a couple of incarnations of this look, and why not? I mean, you don’t even have to worry about what your hair looks like or whether or not you have dark circles under your eyes, just throw it on and you’re good to go! Leigh Bowery has been ‘homaged’ by many, Alexander McQueen, Gareth Pugh – actually, now that I think about it there are probably too many to mention. Bowery worked for Vivienne Westwood for a time too so it’s not surprising that there’s so much overlap between this world of performance art and fashion. Which brings me nicely to Walter Van Beirendonck. The Belgian bear’s SS12 collection was a jaunty multi-coloured gingham affair with a few show stoppers that might look familiar…

LETTUCE HEAD GONE MAD!
They say imitation is the highest form of flattery. I’m not sure ‘flattered’ is all I’d feel but these looks make me smile. I’d say that I’d love to wear one, but really, where would I go in it? I don’t suppose it matters, but it’d be fun. Leigh Bowery always looked like he was having fun, and that’s good enough for me.
Follow Warren – Twitter