Nicola Formichetti is at the very top of his game right now, superstar stylists are hard to come by but they’re important people in the world of fashion and rarely get the recognition they deserve. He is of course the brains behind Lady Gaga and you can’t get much more high profile than that. As well as working with some of my favourite designers like Westwood and some of the world’s leading fashion magazines he’s also now the Creative Director for Thierry Mugler. Love or hate Gaga she’s got everyone talking, not about her music but about her clothes and that’s all down to Formichetti. In an era when celebrities have taken over fashion brands and failed we all waited eagerly to see what Formichetti would do with the almost defunct Mugler label. We weren’t disappointed.
All success stories start somewhere and Formichetti’s started in a shop called The Pineal Eye that used to reside on London’s Broadwick street halfway between Carnaby street and Soho. It had no shop sign and was on the basement level, so like all things ‘cool‘ you had to be in the know to know where and what it was. It was an amazing shop, a haven of avant garde fashion and esoteric styles which are hard to come by in even the major fashion cities. I remember Formichetti selling me a Xavier Delcour top, which took a hefty chunk of my student finances up but served me well as a wardrobe staple for many years. I won’t go into too much detail about the top, suffice to say two words lycra and diamanté (honestly, I did look great in it). I also remember a gold leather jacket that I coveted in the store which I eventually saw Roisin Murphy

wearing, which was of course years before Lady Gaga was around. 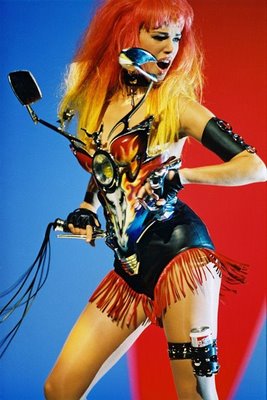 So having paid his dues and clawed his way to the top, what has Formichetti brought to Thierry Mugler? Mugler has a distinctive style, I remember as a child watching George Michael videos with supermodels parading around in Mugler’s motorcycle dress, a look so avant-garde it’s remained practically timeless, in fact Beyonce

resurrected it recently. So what were the clothes like? Well they were infinitely wearable in one sense whilst being extreme and edgy at the same time. The styling was obviously sublime, but there are jeans and jackets I can see fitting into my everyday wardrobe too.  It’s a perfect modern take on the Mugler aesthetic and although it borrows from all over the place what it borrows is impeccable in taste.
There’s a hefty dose of Leigh Bowery in the painted faces and military hats, there’s Westwood in the ripped denim and there’s some of Karin Dreijer Andersson’s Fever Ray persona in the skull faces and death mask make-up. There’s also plenty of metallic work, a nod to both Paco Rabanne’s metal disc dresses and Mugler’s own  work with the material. Basically it was a triumph and I loved it. Tattooed faces? Well they’re not for everyone and I won’t rush into it myself but to see that on the runway is a joy. I can’t wait to get my hands on these clothes, and if I can’t get hold of them, hell I’ll just paint my face black and pretend. 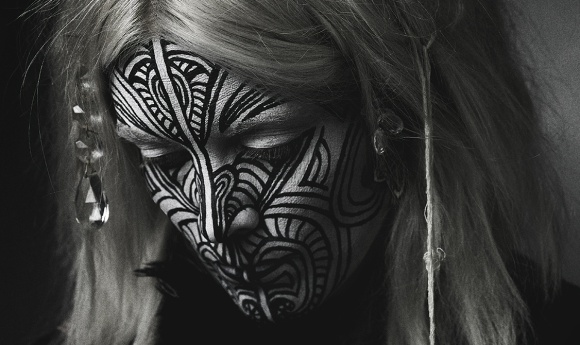 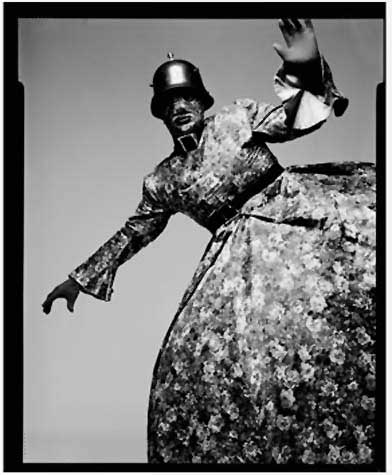 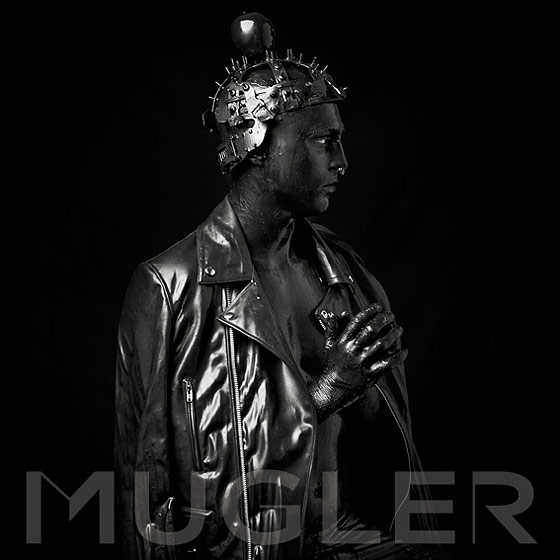